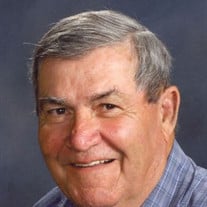 James D. Staley, 83, of Hampton, passed away, Monday, October 10, 2016, at the Muse Norris Hospice Inpatient Unit in Mason City. He was born in Franklin County, Iowa, on July 4, 1933, to Glen Staley and Merna (Hamilton) Staley. Jim attended Country School in Franklin County, graduated from Hampton High School, then attended South Dakota State University where he wrestled, played football and ran track. Jim served his country in the United States Army. He was united in marriage on August 24, 1957, to Joyce Erks, daughter of William and Helen Erks. They were blessed with three children, two sons, Bill and Jeff and a daughter Jolynn. He managed the elevators in Rowan and Alexander. Upon moving to Spencer he worked as a farm manager for Doane Agriculture. Jim and Joyce farmed near Spencer for many years. Then in 1981 moved to a farm North of Bradford where he farmed until he retired. Jim was a member of St. Paul's Lutheran Church in Hampton. While living in Spencer, Jim was the President of the Spencer School Board and was very active in Lion's Club and the Moose Lodge. After relocating to Hampton, he was active in Lion's Club and Bradford Fire Department. Jim enjoyed camping and trail riding with their horses when his children were younger. Jim was one of the original members of the Easter Seals Pony Express Ride for Camp Sunnyside. He loved helping his children raise livestock to exhibit at the County and State Fairs. Jim even spent time chaperoning the boys in the dorms at the Iowa State Fair. He was an avid Cyclone wrestling fan and enjoyed racing cars. Jim is survived by his wife Joyce of Hampton, three children, Bill (Dawn) Staley of Alden, Jeff (Terri) Staley of Hampton and Jolynn (Jim) Reams of Polk City, grandchildren, Casey Staley of Hampton, Lance Staley of West Des Moines, Tyler Staley of Hampton, Travis (Chantal) Staley of Iowa Falls, Colby and Justin Reams both of Polk City and Shelly (James) Cory of Alleman. He has 5 great-grandchildren Brycen and Raycen Staley Iowa Falls and Brayden, Madelyn and Evan Cory of Alleman, brothers, Jerry (Faye), Darrell (Julie) of Ames and a sister Judy McVeigh of Colorado as well as many nieces and nephews. He was preceded in death by his parents and two brothers. In lieu of flowers memorials may be directed to the family.

The family of James D. Staley created this Life Tributes page to make it easy to share your memories.