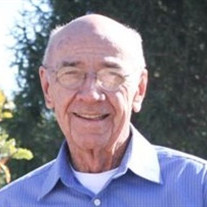 James "Toad" Hannah, 81, of Hansell, Iowa, passed away Sunday, February 10, 2013, at the Franklin General Hospital in Hampton, Iowa. He was born January 23, 1932, in Hampton, Iowa, to William and Winifred (McKinney) Hannah. Toad graduated from Hansell High School and then served his country in the United States Marie Corp, during the Korean Conflict. He was married on January 11, 1953, at the Little Brown Church in Nashua, Iowa, to Doris Paulus. Toad worked all of this life as a farmer. He was a Charter member of the Hansell United Methodist Church after the closing of the Hansell Church, he was a member of the West Fork United Methodist Church and the Dumont American Legion. Toad's passion in life was farming and still was active in the daily operations. He loved spending time with his grandchildren and great grandchildren, never missing any of their events. He is survived by his wife of 60 years Doris Hannah of Hansell, daughter Pam and husband Greg Giddings of Hampton, son Dave and wife Becky Hannah of Hampton, grandchildren Matt (Amy) Giddings, Brandon (Nichole) Giddings, Sarah (Quinn) Showalter, Jennifer (Joshua) Shaw, Brian (Valerie) Hannah and Drew Hannah, great grandchildren Kailee, Maddison, Ayden, Alex and Jake Giddings, Will and Graham Showalter, Mason Shaw and Harley Hannah, brother Bill and Marilyn Hannah of Hampton, Dick Hannah of Kellogg, sister Jo Ghrist of Des Moines. Toad was preceded in death by his parents and one sister Mary. Burial will take place at the Ingham Township Cemetery in Hansell, Iowa

The family of James M. Hannah created this Life Tributes page to make it easy to share your memories.

Send flowers to the Hannah family.