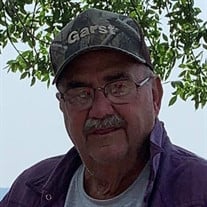 James R. Oltmann, 88, of Allison, Iowa passed away Thursday, January 13, 2022, at the Rehabilitation Center of Allison. James “Jim” Oltmann was born December 19, 1933, to parents Reiner and Jane (Feldman) Oltmann in rural Allison. He attended country school and graduated from Allison High School. James was united in marriage to Barbara Williams on June 20, 1954, in Owasa, Iowa. To this union four children were born. They raised their family outside of Allison. Jim worked as a farmer for most of his life, additionally working as a seed corn salesman for Garst. He served as a Ripley township trustee; a position previously held by his father. He was a member of Trinity Reformed Church and also an active member of the fair board. Jim and Barbara ran the scramble committee for 50 years. Jim had plenty of interests to occupy his free time. He collected tractors, including several antique John Deere models. He also kept draft horses and Belgium horses. He liked to go deer hunting and loved his deer hut. Jim made an annual trip to Canada, most recently making the journey in 2019. Most of all he loved his family, especially his many grandchildren and great-grandchildren. Jim is survived by his children, Joel (Deb) Oltmann, Jon (Diane) Oltmann, and Mary (Mike) Hall, daughter-in-law, Diane Oltmann, grandchildren, Adam (Amy) Oltmann, Ashley Oltmann, Amanda (Scott) Mitchell, Jessie (Derek) Harken, Joshua (Kiley) Oltmann, Michelle (Todd Einck) Arkulari, Michael (Molly) Hall, Megan (Grant) Frietag, Jimmy (Kate) Oltmann, and Jamie Oltmann, and 24 great-grandchildren, with 2 more on the way. He was preceded in death by his parents, his wife, Barbara, and his son, James. Funeral services will be held at 10:30 a.m., Tuesday, January 18, 2022, at Trinity Reformed Church in Allison, with burial in the Allison Cemetery. Visitation will be held from 4:00 p.m. to 7:00 p.m., Monday, January 17, 2022, at Trinity Reformed Church in Allison. The Counsell Woodley Funeral Home of Allison is caring for James and his family.

The family of James R. Oltmann created this Life Tributes page to make it easy to share your memories.

Send flowers to the Oltmann family.