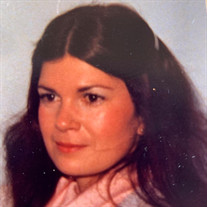 Janet Hagarty, 70, of Iowa Falls, passed away Friday, March 25, 2022 at Hansen Family Hospital. Funeral mass will be 11:00 AM Saturday, April 2, 2022 at the St. Mark Catholic Church in Iowa Falls. She will be laid to rest at 3:00 PM on Saturday, April 2 at the St. Mary's Catholic Cemetery in Greene. Visitation will be from 10:00 AM until service time on Saturday at the church. Counsell Woodley Funeral Home of Iowa Falls is caring for Janet and her family. Janet Ellen Hagarty was born on January 7, 1952 to Donald and Berniece (Dougherty) Hagarty in Charles City, Iowa. After graduation Janet attended Ellsworth Community College. For thirty-four years she was a secretary at Riverside Book and Bible in Iowa Falls, Iowa. Janet was a loving and devoted family person. She enjoyed the simple things in life, such as wild flowers and mowing the grass. She was not attached to possessions. Her faith was very important to her. Janet had a mild temper and was patient, caring and unassuming. She was dependable, honest and loyal to her friends. Janet adored her cat, Simon. She could be goofy- dressing up in costumes for special occasions. Janet Hagarty is survived by her brothers, Jack (Jean) Hagarty of Racine, Wisconsin and Tom Hagarty of Des Plaines, Illinois; a sister, Renee (Fred) Billman of Racine, Wisconsin; niece, Ellen (Jon) Stehlik of Racine, Wisconsin; nephews, Patrick Hagarty of Racine, Wisconsin, Michael Hagarty of Florida, Tom (Laura) Billman of Racine, Wisconsin, Aaron (Linnea) Billman of Footville, Wisconsin and four great-nieces and nephews. She is also survived by her special friend, Gene Pfrimmer of Iowa Falls, Iowa and very dear friends, Craig and Ruth Turner of Iowa Falls, Iowa. She was preceded in death by her parents, Donald and Berniece Hagarty and brother, Gerald Hagarty.

The family of Janet Hagarty created this Life Tributes page to make it easy to share your memories.

Send flowers to the Hagarty family.