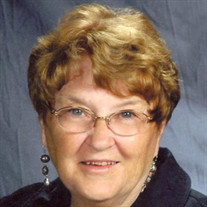 Janice Arlene Wildebour, 82, of Hampton, passed away Tuesday, January 4, 2022, at the Rehabilitation Center of Hampton. Visitation will be held from 5:00 p.m. until 7:00 p.m., Friday, January 7, 2022, at the Counsell Woodley Funeral Home in Hampton. Funeral services will be held at 10:30 a.m., Saturday, January 8, 2022, at St. Paul Lutheran Church in Hampton. Burial will take place in the Hampton Cemetery. She was born July 17, 1939, to Harold and Esther (Koelling) Waskow. Jan graduated from Franklin Consolidated and then from beauty school. She owned and operated her own beauty salon in Hampton. Jan was united in marriage to Richard Dean Wildebour on August 16, 1963, in Coulter. To this union, one son was born: Jason. Jan was a member of St. Paul Lutheran Church in Hampton. She was incredibly proud to be a mother and a grandmother. Her family was important to her. Jan enjoyed watching sports. She was the biggest supporter on the sidelines as she cheered on her son, Jason, and all of his teammates. Jan was an avid Iowa Hawkeyes fan, attending many games with her sisters. She looked forward to tailgating and would prepare all of the food for those tailgates. Jan enjoyed cooking and baking; everything was always made from scratch. Jan is survived by her son Jason (Julie) Wildebour of Ankeny; grandchildren Anna and Logan Wildebour of Ankeny; sisters Margaret Grefe and Marilyn Brunson, both of Iowa City; brother-in-law Delmar Benning of Hampton; along with many nieces and nephews. She was preceded in death by her parents, husband Richard Wildebour, nephew James Brunson, in-laws Harm and Alvina Wildebour, sisters-in-law Beverly (Keith) Davis and Marge Benning, brothers-in-law Jerry Christiansen, Earl Hyde, Bob Grefe and Robert Brunson.

Janice Arlene Wildebour, 82, of Hampton, passed away Tuesday, January 4, 2022, at the Rehabilitation Center of Hampton. Visitation will be held from 5:00 p.m. until 7:00 p.m., Friday, January 7, 2022, at the Counsell Woodley Funeral Home in... View Obituary & Service Information

The family of Janice A. Wildebour created this Life Tributes page to make it easy to share your memories.

Send flowers to the Wildebour family.