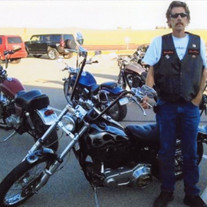 Jeffery Allen Walterman, 46, of Hampton, Iowa, passed away Sunday, May 6, 2012, at his home in Hampton, Iowa. He was born October 29, 1965, in Iowa Falls, Iowa, to Joe and Betty (Anderson) Walterman. Jeff grew up in Williams, Iowa and graduated from Northeast Hamilton High School in Blairsburg, Iowa. He married Debbie Hovenga on June 27, 1987, in Hampton, Iowa. Jeff worked at Edwards Construction in Hampton. He was affiliated with First Christian Church in Hampton, Iowa. Jeff was an avid racing fan. He loved and enjoyed all types of racing but he especially loved drag racing and John Force. He enjoyed the time he spent at the races with his brothers, Mike and Chris. Jeff also enjoyed being outdoors. He was a hunter and enjoyed deer hunting with the guys at the cabin. He spent a lot of time rebuilding and riding his Harley with his son, Dillan. He also loved all of the time he spent at the Mississippi river with his family, as this is something they did often. Jeff was a very family oriented guy and adored his family. He spent most of his time with them. He spent much precious time with his wife Debbie, his daughter Candiss and his only grandson Julien. Jeff is survived by his wife Debbie of Hampton, daughter Candiss of Hampton, grandson Julien of Hampton, mother-in-law Evelyn Hovenga of Hampton, sister Peg and husband Dwayne Koontz of Marion, brother Mike and wife Dianne Walterman of Williams, brother John and wife Diana Walterman of Cedar Rapids, brother Chris and wife Nancy Walterman of Fort Dodge, sister-in-law Donna and husband Gary Uhlenhopp of Geneva, sister-in-law Dawn and husband Jamie Foy of Hampton, many special nieces and nephews. He is preceded in death by his parents, his son Dillan, sisters Donette and Chic and his father-in-law David Hovenga. Burial will take place at the Hampton Cemetery in Hampton, Iowa

Jeffery Allen Walterman, 46, of Hampton, Iowa, passed away Sunday, May 6, 2012, at his home in Hampton, Iowa. He was born October 29, 1965, in Iowa Falls, Iowa, to Joe and Betty (Anderson) Walterman. Jeff grew up in Williams, Iowa and graduated... View Obituary & Service Information

The family of Jeffery Allen Walterman created this Life Tributes page to make it easy to share your memories.