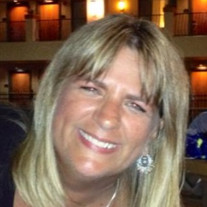 Jennifer L. (Berry) Healey, 41, of Hampton, Iowa, passed away Wednesday, April 22, 2015, at the Franklin General Hospital in Hampton, Iowa. She was born August 25, 1973, to Thomas & Linda (Varrelmann) Berry in Hampton, Iowa. Jennifer graduated from Hampton Dumont High School in 1991. She was united in marriage to Daryl Healey on February 21, 2003, in Las Vegas, Nevada. While living in Superior, Nebraska, Jennifer was the first women to join the Superior Volunteer Fire Department and Superior Elks Club, she was also an avid golfer and had many friends in the superior area. Jennifer worked at State Farm Insurance, Thompson Insurance, Superior/Nelson Insurance, then when she returned to Hampton she worked at Franklin County Farm Bureau. She was an active member of the Hampton Chamber of Commerce and The Greater Franklin County Chamber of Commerce Ambassadors, where she was Ambassador of the Year in 2013 and also was Main Street Volunteer of the Year. Jennifer was involved in all areas of the Chamber and had a love for the community. If you asked Jennifer's Farm Bureau Board they would give Jen the "World's Best" award. She helped her board receive outstanding County awards and made all events successful. They will miss her so much. County fairs, Bloggers Tour, Breakfast Battle and Ag Fairs are not going to be the same without her. Jennifer was dedicated to all and the mission of connecting Farm Bureau with our community. Jennifer enjoyed spending time with her family, especially watching her children's sporting events. She enjoyed being outside, working in her flower garden and sitting on her patio with Daryl. Jennifer is survived by her husband Daryl Healey of Hampton, son Taylan Healey of Hampton, daughter Gracelyn Healey of Hampton, parents Thomas and Linda Berry of Hampton, brother Steve (Rhonda) Berry of Johnston, nephews Blake and Drake of Johnston, uncle Giles (Deb) Varrelmann, mother-in-law Doris Healey of Superior, Nebraska, step son Andrew Healey of Superior, Nebraska, step son Shane Healey of Omaha, Nebraska, step daughter Stephanie (James) Dalrymple of Colorado Springs, Colorado, step grandchildren Hunter Healey, Isabelle, Gabrielle and Kaniel Dalrymple , brother-in-law David (Barb) Healey of Superior, Nebraska, brother-in-law Robert (Rhonda) Healey of Kearney, Nebraska, sister-in-law Cheryl (Gary) Hunt of North Platte, Nebraska and several cousins. She was preceded in death by her maternal grandparents Herbert and Gladys Varrelmann, paternal grandparents Joseph and Milly Berry, father-in-law Jimmy Healey aunt Janine Riordan, uncle Dan Riordan uncles Mike and Pat Berry, cousin Michael Berry. Burial will take place at the Hampton Cemetery in Hampton, Iowa. In lieu of flowers, memorials given will be deposited in a college fund in honor of Jennifer's children Taylan and Gracelyn. Memorial may be payable to the Jennifer L. Healey Memorial Account at the United Bank and Trust Company, P.O. Box 555, Hampton, Iowa 50441.

The family of Jennifer L. (Berry) Healey created this Life Tributes page to make it easy to share your memories.