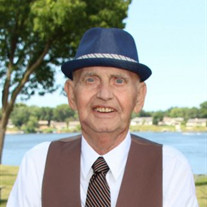 Jerry LaVern Plagge was a son, a brother, a nephew, a cousin, a husband, a father, a papa, a grandpa, a great grandfather and a friend to many people. He was a man with great insight, vision and integrity who cared about his community and county and spent many years of his life serving it and it's people. Always willing to listen to all sides of an issue, he made his decisions based upon fairness and what was best for the greater good. Jerry was born April 3, 1943, to LaVern and Shirley (Reinke) Plagge in Hampton, Iowa. He attended Franklin Consolidated High School and graduated from Yankton College in South Dakota. Jerry was married on July 23, 1971, in Galena, Illinois, to Jeanne Mapes. He served as Franklin County Supervisor, realtor for Krukow Real Estate, owner/operator of Country Corners Ltd. Antiques and Country CUREator furniture restoration. He also served as Mayor of Latimer after serving as a Councilman, farmer and Executive Director of Benton, Iowa, Poweshiek and Tama Community Action Program. Jerry was a member of Immanuel United Church of Christ where served as a board member and treasurer. He was a charter member of Latimer Development Board, Franklin County Economic Board, NIVC Board of Directors, NICA Board of Directors, NIJDC Board of Directors, and served on many regional and state boards throughout the years. Jerry enjoyed exploring antique and resale shops, planting and caring for his flowers, reading and searching for vintage and first edition books, collecting farm toys and model cars, listening to all kinds of music especially classical and music of the 50's and 60's and dancing with Jeanne. He enjoyed taking in plays, musicals and all museums. Jerry supported his son's various sporting events as he coached high school sports throughout the years. He loved attending his grandchildren's athletic events, plays, music concerts and church programs, but most of all just spending quality time with family. Jerry knew no strangers and always had time for conversation and a parting smile. Jerry is survived by his wife Jeanne (Mapes) Plagge of Latimer, daughter Gabrielle Sandberg of Ankeny, son York & Elizabeth Plagge of Grinnell, son Scott & Julie Plagge of Forest City, son Troy & Carol Plagge of Boerne, Texas, grandchildren Ryley Sandberg of Ankeny, Paige Sandberg of Ankeny, Jordan Plagge of Forest City, Amanda Plagge of Forest City, Brandon (Chelsea) Plagge of San Antonio, Texas, Bryon Plagge of Boerne, Texas, great grandchildren JayDee Plagge of Forest City, Alyndra Plagge of San Antonio, Texas, Zoe Plagge of San Antonio, Texas, Makenzie Plagge of San Antonio, Texas, sister and brother in law Joyce & Don Benes of Clear Lake, brother in law and sister in law Jim & Arlis Mapes of Latimer, aunt Lorena Koch of Hampton, aunt Elaine Reinke of Geneva and aunt Evonne Plagge of Latimer. He is preceded in death by his parents LaVern & Shirley Plagge, infant daughter Dawn Ranee and father in law and mother in law Floyd & Maudie Mapes. The family asks that in lieu of flowers you consider a gift in Jerry's memory to the Education Foundation of CAL or the Immanuel United Church of Christ Organ Fund. Other gifts will be used to support various Franklin County organizations.

Jerry LaVern Plagge was a son, a brother, a nephew, a cousin, a husband, a father, a papa, a grandpa, a great grandfather and a friend to many people. He was a man with great insight, vision and integrity who cared about his community and county... View Obituary & Service Information

The family of Jerry L. Plagge created this Life Tributes page to make it easy to share your memories.

Jerry LaVern Plagge was a son, a brother, a nephew, a cousin,...