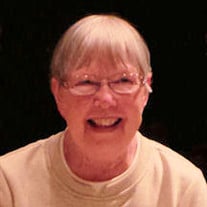 JoAnn Ruth (Hovenga) Bruns, 72, of Dumont, Iowa, passed away Monday, May 12, 2014, at her home in Dumont. She was born on February 8, 1942, in Aplington, Iowa, to Harm and Gertrude (Hulzebos) Hovenga. JoAnn graduated from Dumont High School in 1959. She was united in marriage to Donavon Bruns on October 9, 1959, in Nashua, Iowa. JoAnn loved attending the Dumont Reformed Church and was active in the Reformed Church Women's Group. She loved her home and it was a favorite gathering place for family holidays, scrapbooking parties, wedding and graduation preparations, along with supper and TV nights. JoAnn was a devoted daughter, wife, mother, grandmother, great-grandmother, daughter-in-law and friend. She and Donavon farmed and milked cows. JoAnn was the first one up in the mornings and the last one in at night. She also bottle fed many calves and loved gardening. JoAnn worked at Lutheran Mutual Insurance in Waverly, the Co-op in Dumont and at the North Central Vet Center. Throughout her illness her faith stayed strong. She was kind and loved life. Her memory lives on in the influence she had on her family and through her influence in other people's lives. JoAnn was an amazing lady and was her family's blessing. JoAnn is survived by her daughter Sherry (Lowell) Miller of Dumont, son Brian (Colette) Bruns of Dumont, daughter Rhonda (Justin) Schmidt of Dumont, son Terry (Kathy Hinten) Bruns of Dumont, grandchildren Katie (Lyle) Hanna, Elizabeth (Karl) Eilderts, Pascale Bruns, Kollin Bruns, Nicolaus (Ashley Coburn) Brown, Sarah (Justin) Behn, Joseph (Elizabeth Miller and her son Dustin Miller) Brown, Samuel Brown, Jonathon Schmidt, Jeffrey (fiance Madison) Bruns, Mason Bruns, Madisyn Bruns, Martin Hinten and Dalton Hinten and great-grandchildren Haylee Hanna, Emma Behn and Kinsley Brown due in July. She was preceded in death by her parents Harm and Gertrude, husband Donavon, sister Eunice Walkenhorst, brother-in-law Dallas Walkenhorst and father and mother-in-law Johnny and Eleanor Bruns. Burial will take place in the Dumont Cemetery.

JoAnn Ruth (Hovenga) Bruns, 72, of Dumont, Iowa, passed away Monday, May 12, 2014, at her home in Dumont. She was born on February 8, 1942, in Aplington, Iowa, to Harm and Gertrude (Hulzebos) Hovenga. JoAnn graduated from Dumont High School... View Obituary & Service Information

The family of JoAnn Ruth Bruns created this Life Tributes page to make it easy to share your memories.

Send flowers to the Bruns family.