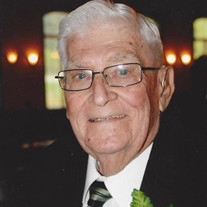 John W. "Bill" Bigler, 90, of Dumont, Iowa, passed away Sunday, May 1, 2016, at the Dumont Wellness Center in Dumont, Iowa. He was born August 21, 1925, in Cedar Falls, Iowa, to Floyd and Irene (LeValley) Bigler. Bill graduated from Cedar Falls High School and then enlisted in the United States Army Air Corp during World War II. After returning home, he attended Iowa State Teachers College in Cedar Falls, Iowa, where he received his business degree and later went on to earn his Master's Degree from the University of Iowa. He was married on May 21, 1949, in Cedar Falls, Iowa, to Naomi (Penny) Penfold. Bill was both a teacher and later a principal in the Dumont Community School before he joined Life Investors in 1959 as agent #4. Bill was an active member of St. Patrick's Catholic Church in Hampton, Iowa, and of the Hampton Country Club, the Lions Club and the American Legion. He enjoyed golfing, dancing, music, and the Iowa Hawkeyes. He especially loved to watch his children and grandchildren participate in sports and school activities. In his retirement years, he and Penny shared the great joy of wintering in Lake Havasu City, AZ, with their family, friends and visitors. He is survived by his son, David (Lee Ann), of Lakeville, MN; daughter, Teresa (Keith) Anderson, of Kalona, IA; daughter, Angela (Russell) Swieter, of Des Moines, IA; son, Jeff (Marnie), of Rochester, MN; daughter, Lisa (Scott) Sailer, of Urbandale, IA; cousin, Betty Harrelson, of Cary, North Carolina; sister-in-law, Wilma (Stanley) Embree, of Atlantic, IA; fourteen grandchildren, eighteen great-grandchildren and many nieces and nephews. He was preceded in death by his parents, Floyd and Irene; his wife, Penny; his son, Mark; his brother, Bob (Moya); and his grandchildren, Erica and Nathan Wagner. In lieu of flowers memorial may be direct to Cedar Valley Hospice or St. Patrick's Catholic Church in Hampton.

The family of John W. Bigler created this Life Tributes page to make it easy to share your memories.

Send flowers to the Bigler family.