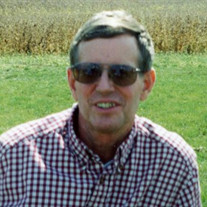 John Stephen Rosenstock, 65, of Dumont, Iowa, passed away April 18, 2012, at the Rehabilitation Center in Hampton, Iowa. He was born March 18, 1947, to Carl Edward and Elenor (Stoddard) Rosenstock. John graduated from Dumont Community School in 1965, he then attended Barber School in Waterloo, Iowa. John served his country in the US Army from 1967-1969 in Vietnam, where he was awarded the Purple Heart and the Metal of Honor. He married Grace Scarrow on July 13, 1973, to this union a son, Brian was born. John worked as a Barber in Aplington from 1971-1973, then he worked for Bulter County from 1973-2000, he also worked for a short time at Sukup Manufacturing. He loved to fish and be outdoors, he was also ready to lend a helping hand to anyone who may have needed it. John was very proud of his son Brian and wife Kristen and his beautiful granddaughters Lyla and Aubrey. John enjoyed time driving his Kobota cart and tractors, but his true enjoyment in life was spending time with family and friends at camp LaCupolis where he had many great memories. He is survived by his wife Grace of Dumont, son Brian and wife Kristen of Brunswick, Ohio, granddaughters Lyla and Aubrey, sister-in-law Virginia and husband Keith Kalkwarf of Aplington, nephews Todd and Joel Kalkwarf, six great nephews and nieces and many close friends and neighbors. John was preceded in death by his parents, father and mother in law. Memorial may be directed to the Huntington's Disease Society of America. Burial will take place at the Dumont cemetery.

The family of John S. Rosenstock created this Life Tributes page to make it easy to share your memories.

Send flowers to the Rosenstock family.