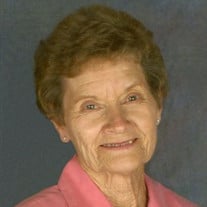 Joyce F. Staley, 83, of Hampton, passed away on Monday, March 27, 2017, at Scenic Manor Nursing Home in Iowa Falls, Iowa. She was born in Akron, Iowa, on September 17, 1933, to William and Helen (Krause) Erks. She grew up on a farm near Akron, IA which was seven miles from the South Dakota border. Joyce attended Country School in Plymouth County and graduated from Akron High School where she was editor of the school newspaper, participated in one act plays and played basketball. She then attended Wartburg College in Waverly, Iowa. Joyce was the secretary in Public Relations and the Student Affairs office for several years. Joyce moved to Brookings, SD to work in the Air Force ROTC office at South Dakota State University. She met Jim at South Dakota State University. She was united in marriage at St. John's Lutheran Church on August 24, 1957, to James D. Staley, son of Glen and Merna (Hamilton) Staley. They were blessed with three children, two sons, Bill and Jeff and a daughter Jolynn. She raised her children and assisted Jim at the elevator during harvest season and did book work from home while living in Rowan and Alexander. She was a cub scout leader too. Joyce was instrumental in getting a library in Rowan and Alexander. With help from the Rowan Women's Club they were able to accomplish this. The family moved to a farm near Spencer, IA. She worked as a sales clerk at JcPenney and Sernett Department Stores. Jim and Joyce farmed near Spencer for many years. Then in 1981 moved to a farm North of Bradford where they farmed until retirement. Joyce was a member of St. Paul's Lutheran Church in Hampton. She worked at Dr. Snell's Optometry Office. While living near Bradford she enjoyed working in the ice cream stand at the Franklin County Fair for many years. Joyce enjoyed helping Jim with the family farming operation and attending her children's sporting events. She also looked forward to having coffee with the ladies at Gorder's Cafe. Joyce loved her grandkids and spent many hours with them. Many times you would find Joyce out walking or working in her yard. Joyce is survived by her three children, Bill (Dawn) Staley of Alden, Jeff (Terri) Staley of Hampton and Jolynn (Jim) Reams of Polk City, grandchildren, Casey Staley of Hampton, Lance Staley of West Des Moines, Tyler Staley of Hampton, Travis (Chantal) Staley of Hampton, Colby and Justin Reams both of Polk City and Shelly (James) Cory of Alleman. She has 5 great-grandchildren Brycen and Raycen Staley of Hampton and Brayden, Madelyn and Evan Cory of Alleman, sisters, Phyllis (George) Milldrum of Badger, South Dakota and Kaye Christenson of West Des Moines as well as many nieces and nephews. She was preceded in death by her parents and her husband. In lieu of flowers memorials may be given per the family.

The family of Joyce Staley created this Life Tributes page to make it easy to share your memories.

Send flowers to the Staley family.