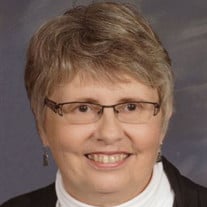 Juliana Gayle Routh, 66, of Hampton, Iowa passed away at home on Saturday, January 16, 2016. She was born April 22, 1949 in West Union, Iowa, the daughter of Lawrence and Kathleen (Pape) Traeger. Julie attended grade school in Hawkeye, where her parents owned the local IGA grocery store, and graduated from North High in West Union in 1967. She attended the University of Northern Iowa and earned her Bachelor's Degree in Education with an emphasis in Special Education in 1971. She accepted her first teaching job in Iowa Falls the following fall. Through mutual friends she was introduced to Donald Routh, Jr. and they were united in marriage on July 28, 1973 in Eldorado, Iowa. To this marriage was born two daughters, Megan and Nicole. After the birth of her daughters she stayed home to raise them, returning to teaching in 1983, and spent the remainder of her teaching career in the special education department of the Hampton-Dumont School District, retiring in 2007. Julie was a member of St. John Lutheran Church in Sheffield where she participated in the bell choir, Rebekah Circle, and loved serving as a reader and liturgist when she was still able to do so. She was also a member of PEO in Hampton. She loved spending time on the river boating and fishing and at the Traeger family cabin in Harpers Ferry. She enjoyed gardening, raising flowers, and being outside in the summer months and was always ready for a tea party with friends. Julie found the greatest joy in being with her family, especially her grandson and granddaughters and would drop whatever plans she had at a moment's notice if invited to come and babysit. After suffering a major stroke in the fall of 2007, Julie dealt with chronic pain and suffered more than anyone ever knew. Yet, through it all, she remained strong in her faith and looked forward to that day when she would finally get to meet Jesus and be free of her pain once and for all. She is survived by her husband, Don and daughters Megan (Joel) Etnier of Alden and Nicole (Rev. Corey) Larson of Eldora, grandchildren Owen and Ruby Larson and Cassidy Etnier, her mother Kathleen of Hawkeye, her sister Jayne (Ken) Weber of Cedar Falls, nieces Hilary (Andy) Iehl and Brianna Weber, both of Cedar Falls. She was preceded in death by her father, Lawrence, her parents-in-law, Donald Sr. and Martha (Bower) Routh, and her brother-in-law Robert Routh. Burial will take place in the Hampton Cemetery.

Juliana Gayle Routh, 66, of Hampton, Iowa passed away at home on Saturday, January 16, 2016. She was born April 22, 1949 in West Union, Iowa, the daughter of Lawrence and Kathleen (Pape) Traeger. Julie attended grade school in Hawkeye, where... View Obituary & Service Information

The family of Juliana Gayle Routh created this Life Tributes page to make it easy to share your memories.

Juliana Gayle Routh, 66, of Hampton, Iowa passed away at home...

Send flowers to the Routh family.