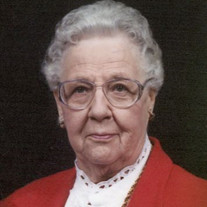 June Olivia Stubbe, 94, of Dumont, Iowa, passed away Thursday, March 7, 2013, at the Dumont Wellness Center in Dumont, Iowa. She was born December 19, 1918, at the Cook County Hospital in Chicago, Illinois, to Clarence E. & Minnie (Zimmerman) Barnett. June graduated from Aredale High School in 1936 in Aredale, Iowa. June was united in marriage on March 16, 1940, at the First Methodist Church in Mason City, Iowa, to Ben Stubbe. To this union two daughters were born Judith and Charolet. They spent their entire married life farming together eight miles north of Dumont. She was a member of the Aredale Methodist Church and was active in Eastern Star and her church. June enjoyed volunteering her time for the Red Cross in Waterloo, Butler County Fair and selling tickets for the Aredale Fireman, where she would sell the most tickets. She enjoyed dancing, playing cards, being around people and going to Aredale every morning for coffee. June is survived by her daughter Charolet and husband Don Hanson of Idaho Springs, Colorado, sister-in-law Gertie Marsh of Greene, grandchildren Bernard Epple of Indianola, Andrew (Julie) Epple of Grants Pass, Oregon, Jodi (Jason) Balazs of Colorado Springs, Colorado, Curtis (Rhonda) Johnson of Green River, Wyoming, fourteen great grandchildren and many nieces, nephews and cousins. She was preceded in death by her parents, husband Ben, daughter and son-in- law Judith and Orrie Epple, brothers Chester and Clark Barnett and a grandson Edwin Epple. Burial will take place at the Dumont Cemetery in Dumont, Iowa Memorial may be sent to P.O. Box 12, Aredale, Iowa 50605

The family of June Olivia Stubbe created this Life Tributes page to make it easy to share your memories.

Send flowers to the Stubbe family.