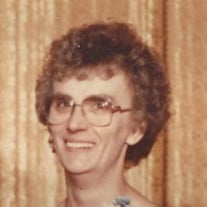 Karen K. Zacharias, 64, of Dumont, Iowa, passed away, April 9, 2012, at the Mercy Medical Center North Iowa Hospital in Mason City, Iowa. Karen was born October 6, 1947, in Hampton, Iowa, the only child to Vern & Irene (Frederick) Hemm. She grew up on a farm northwest of Hampton. Karen graduated from Hampton High School in 1965 and from Ellsworth Community College in 1967. Karen married Ronald Zacharias on November 9, 1973, in Quincy, Illinois. Karen was a member of the Sixth Street Church of Christ in Hampton. She was also a member of the Tri County CB Club where she was known as "Lady Bird". She loved spending time with her family, especially her grandchildren. In her free time, she enjoyed fishing, watching her favorite television show "Golden Girls", and playing with her loyal companions, her dogs, Duke, Dolly and Midge. Karen is survived by her husband Ronald of Dumont, daughter Sandy Lunning of Estherville and her children, Andrea & Eli; son Vernon Zacharias and his wife Sara (Puffenbarger) of Hampton and their children Kirk, Heather Vassar, Kaylee, Nathan, Tyler, Courtney, Trevor and Logan, and 4 great grandchildren. She is preceded in death by her parents, father-in-law (LaVern) and many aunts and uncles. Burial will take place at the Maynes Grove Cemetery in rural Hampton, Iowa.

The family of Karen K. Zacharias created this Life Tributes page to make it easy to share your memories.