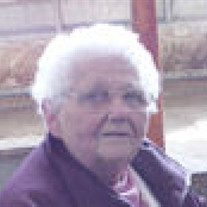 Kathryn M. Richard, 87, of Seventh Heaven, 1321 Tomahawk Dr. and formerly of 2625 Miner Ave., Greene, Iowa, died Wednesday, January 18, 2012 at Seventh Heaven. Kathryn was born on February 7, 1924 in Dumont, Iowa the daughter of Jans and Hilka (Miller) Folkerds. She enjoyed working as a nanny for many years. While attending a baseball game, she met Merlyn Richard and on June 23, 1944, the two were married at Ft. Jackson, S.C. Merlyn preceded her in death on November 21, 1998. Kathryn moved to Dubuque in 2007 to be near her daughter, Marilyn. She attended St. John's U.C.C. in rural Nashua, IA and Hope Church in Dubuque and enjoyed gardening, canning, cooking, hospitality, and crocheting. Telling stories and playing cards with family and friends. Five Hundred, Pinochle, and Skipbo were her favorite pastimes. Surviving is her daughter Marilyn Richard of Dubuque, Iowa and her sister Jeanette Hayner of Dumont, Iowa. She was preceded in death by her parents; her husband; two sisters Etta Reysack and Tillean McGrean; three brothers John, Claus and Lavern Folkerds. A Kathryn Richard memorial fund has been established. Marilyn wishes to extend a special thank you to Mary and J.R. Elliott and the staff at Seventh Heaven for their devotion in caring for Kathryn over the past year; Ennoble Skilled Nursing and Rehab; Pastor Matt and Carol Collins for their support and fellowship and to the many friends who are like family. Burial will take place at the Dumont Cemetery in Dumont, Iowa.

The family of Kathryn M. Richard created this Life Tributes page to make it easy to share your memories.

Send flowers to the Richard family.