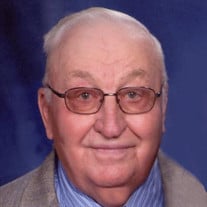 Kermit Sandersfeld, 94, of Latimer, Iowa, passed away Friday, March 11, 2022, at Franklin Country View Nursing Facility in Hampton. Funeral service will be held at 1:30 p.m., Wednesday, March 16, 2022, at St. Paul’s Lutheran Church in Latimer, with burial to follow in the church cemetery. Visitation will be held from 4:00 p.m. to 7:00 p.m., Tuesday, March 15, 2022, at Counsell Woodley Funeral Home in Hampton. Kermit Karl Sandersfeld was born on September 10, 1927, in Klemme, Iowa, son of Karl B. and Wilhelmina (Ax) Sandersfeld. He was baptized on October 23, 1927, by Rev. Calvin Grosshulsch at the Evangelical & Reformed Church in Klemme and was confirmed on May 16, 1943, at St. Paul’s Lutheran Church in Latimer by Pastor E. L. Runge. Kermit’s confirmation verse was Psalm 37:4 (his wife Marlene had the same confirmation verse). Kermit attended St. Paul’s Lutheran School and received his eighth grade diploma in 1942. He then went on to attend Franklin Consolidated High School in Latimer. On May 22, 1982, Kermit received his GED from North Iowa Area Community College in Mason City, at the age of 54. Kermit enlisted in the United States Marine Corps and was inducted on December 14, 1951. He was a private first class for platoon 506 and worked as a baker during the Korean Conflict. On December 1, 1953, Kermit was honorably discharged from Camp Pendleton, California. After his time in the service Kermit started farming, making a lifelong career raising various animals and growing row crops in the Franklin County area. He met Marlene Dreyer and they were married on March 3, 1957. To this union four children were born: Paul, Carol, Janette, and Ann. Kermit and Marlene opened their home as a host family in 1979 for one school year to Anna Melkkila from Finland, until she graduated with Janette from CAL. They were blessed to celebrate their 65th wedding anniversary prior to Kermit’s passing. Kermit was very active throughout Franklin County. He was a former 4-H leader of Northwest Franklin Chapter for seven years, was a FFA Honorary Chapter Farmer, was a committee member for Scott township ASCS, and was a former member of Branch 2329 Aid Association for Lutherans in Latimer (now known as Thrivent), where he served as president for twenty-two years. He was a former member of the Hansen-Have American Legion Post 658 for sixty-nine years, and a current member of Dows Legion Post 523. Kermit was a longtime and active member of St. Paul’s Lutheran Church in Latimer and the Lutheran Laymen’s League of St. Paul’s Lutheran Church. Kermit enjoyed traveling with Marlene. Together they went on over 100 bus trips across the United States, and had the opportunity to go on one cruise. They also enjoyed various family road trips over the years with their children. Kermit spent many years going to Dudley’s for breakfast and coffee time, where he enjoyed many great meals and conversations, and gained even more friends. Kermit is survived by his wife, Marlene Sandersfeld; son, Paul (Jackie) Sandersfeld; daughter, Carol Sandersfeld; daughter Janette (Jeffrey) Reuter; daughter, Ann (Danny) Jester; grandchildren, Tonia (Ryan) Miller; Jenna (Brett) Watson; Kendra (Tyson) Muhlenbruch; and Karlton Reuter; great-grandchildren, Breckin, Cambry and Bowen Watson; Karson and Kolby Muhlenbruch; niece, Emily Mikesh; and nephews, Fred Goll and Herman Goll. He was preceded in death by his parents, Karl and Wilhelmina; sister, Marie in infancy; half-sister, Naomi Goll; niece, Paula Sittsworth; and cousin, Mary Sandersfeld. Kermit’s family wishes to send a heartfelt thank you to the Franklin Country View Nursing Facility staff for their amazing care they gave Kermit during his stay there. In lieu of flowers, memorial contributions may be given to St. Paul’s Lutheran School in Latimer, in memory of Kermit. Counsell Woodley Funeral Home is caring for Kermit and his family.

The family of Kermit Karl Sandersfeld created this Life Tributes page to make it easy to share your memories.

Send flowers to the Sandersfeld family.