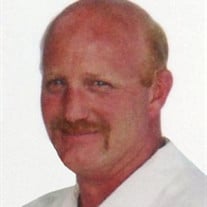 Kirk David "Red" Johnson, 58, of Allison, passed away Sunday, October 22, 2017, at the Rehabilitation Center of Allison in Allison, Iowa. He was born August 13, 1959, in Waverly, Iowa, to Merwyn and Elaine (Chapin) Johnson. Kirk graduated in 1978 from Janesville High School. He was united in marriage to Cindi Henrichs on October 4, 1986 at St. James Lutheran Church in Allison, Iowa. Kirk was employed at Kay's in Janesville, Hobson's in Shell Rock and was employed at Unverferth in Shell Rock up until his health failed. Kirk was very involved as a volunteer fireman and crew member of the Allison Ambulance He was a former city council member and a member of many other clubs in the community. Kirk was a member of St. James Lutheran Church in Allison. He enjoyed the outdoors and a good nap. Kirk enjoyed spending time with his family and friends. He loved camping, hunting, driving around checking out the wildlife and stopping by friends' houses to visit. Kirk is survived by his wife Cindi Johnson of Allison, daughters Bailey (Herb Mittelstadt) Johnson of Allison, Arren (Carver) Allen of Dunkerton, Kristi (Shane) Barnett of Allison, Jessica Wind of Nevada City, California, grandchildren Gavin and Carson Allen, Cora and Lila Barnett and Emma Wind, brothers Eric Johnson of Allison, Aaron (Sandra) Johnson of Janesville, along with many nieces and nephews. He was preceded in death by his parents, sister Kristi Danielson, maternal and paternal grandparents. In lieu of flowers, memorials may be directed to Kirk's family, Allison Fire Department or Allison Ambulance Services.

The family of Kirk David "Red" Johnson created this Life Tributes page to make it easy to share your memories.