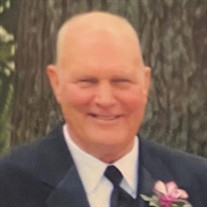 Larry Dean Jungling, 74, of Dumont, passed away Thursday, April 21, 2022, at Franklin General Hospital in Hampton. A public visitation will be held Monday, April 25, 2022, from 4:00 p.m. to 7:00 p.m., at Counsell Woodley Funeral Home, 902 West Broadway Street in Dumont. A private family service will be held. Larry was born on April 21, 1948, in rural Aplington, to George and Grace (Boelman) Jungling. He graduated from Aplington High School and was drafted into the United States Army during Vietnam. On August 16, 1973, Larry married Janice Kay DeGroote at the Little Brown Church in Nashua. Larry was a truck driver for most of his life. He drove truck and his wife Jan did the bookkeeping. When Larry wasn’t on the road, he enjoyed working in his shop tinkering, building, welding, and fixing various things, often with his great-nephew Zach. He was very innovative and always kept busy. Larry enjoyed golfing, playing bags, family time and attending his grandson Jaden’s sporting event. He also enjoyed having coffee with his friends, barely ever missing a day. Larry will be missed by his daughter Melissa Jungling of Dumont, grandson Jaden Mason of Dumont, sister Ruth (Harold) Buseman of Aplington, his cherished dog Gabby, along with many nieces, nephews, extended relatives and friends. He was preceded in death by his parents George and Grace, wife Jan, and brothers Bill and Ron. Counsell Woodley Funeral Home of Dumont is caring for Larry and his family.

The family of Larry Dean Jungling created this Life Tributes page to make it easy to share your memories.

Send flowers to the Jungling family.