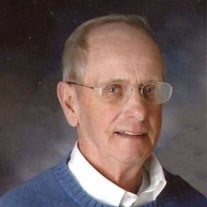 Leland Richard Muhlenbruck, age 72 of Latimer, passed away with his family at his side at Mercy Hospital in Mason City, IA on June 30, 2013. Leland was born on June 17, 1941 to Alva and Rebecca (Koenen) Muhlenbruck. He was raised on the family farm in rural Chapin and graduated from Chapin High School in 1959. Leland married his wife, Judith (Schaffer), on July 9, 1960 at St Paul Lutheran Church in Latimer, IA. They spent the rest of their life together living in Latimer. Leland spent his life in the grain elevator business. He loved his work at Latimer Grain, D&J Feeds, and FC Cooperative. Even in his retirement he continued to work at the elevator handling corn and fertilizer. Leland was a member of the United Church of Christ in Latimer. He also served as a member of the Latimer Fire Department for several years. Leland was a youth baseball coach in Latimer for many years, coaching the Latimer Twins Little League team and the Babe Ruth Latimer Lynx. He was a mentor to many young men through this service, including his own three sons. He also volunteered for many years on the football chain gang at CAL High School. Later in life, Leland grew to love his grandchildren. He and Judy could be seen at ball games and activities all over the state of Iowa and Minnesota. He was always their biggest fan. No matter where you saw Leland, you always knew you would get a piece of candy. He loved to make others smile and always looked out for those less fortunate than himself. Leland loved his dog, Hannah. Leland is survived by his beloved wife of nearly 53 years, Judith. Three sons; Kirk (Lori) of Northfield, MN, Trent Muhlenbruck of Ankeny, IA, and Tom (Tami) Muhlenbruck of Ankeny, IA. He is survived by 11 grandchildren and 1 great grandchild. He is also survived by a sister, Lola Furman of Iowa Falls. He was preceded in death by his parents and a sister, Berniece Crabb. Memorials can be made to the Immanuel United Church of Christ in Latimer, IA to be used toward the purchase of a new church organ. Burial will take place at the Marion Center Cemetery in rural Latimer, Iowa.

Leland Richard Muhlenbruck, age 72 of Latimer, passed away with his family at his side at Mercy Hospital in Mason City, IA on June 30, 2013. Leland was born on June 17, 1941 to Alva and Rebecca (Koenen) Muhlenbruck. He was raised on the family... View Obituary & Service Information

The family of Leland R. Muhlenbruck created this Life Tributes page to make it easy to share your memories.

Leland Richard Muhlenbruck, age 72 of Latimer, passed away with...

Send flowers to the Muhlenbruck family.