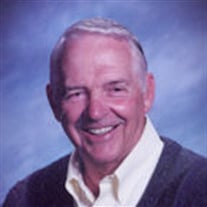 Leonard "Len" Berghoefer, 76 of Hampton, Iowa died on Monday, July 26th at Franklin General Hospital after a long and courageous battle with cancer. Leonard was born March 10, 1934 at home in rural Hampton, Iowa the son of Edward and Emma (Reinking) Berghoefer. Len was baptized on April 1, 1934. Confirmed at Trinity Lutheran Church on March 21st, 1948. Len claimed he was born on Saturday because they went to church the next day. Len graduated from Hampton High School in 1952.....He was active in 4-H and later became a leader with the Hampton Hustlers; Franklin County 4-H. Len began farming at an "early" age, and committed his life to farming in the livestock and grain business for nearly 50 years. He rented his first farm ground while a junior in high school. After farming for 5-years with his dad; it became impossible to rent more farmland to increase the farming operation so he decided to get a college education. He put himself through school receiving his Bachelor's Degree in agriculture business and economics from Colorado State University in Fort Collins, Colorado. He continued his education and attended Iowa University where he entered law school. The farm kept calling him back; after 2-years of law he returned to the farm, and set up a business partnership with his dad and brother Cliff. Brother Del joined the partnership upon their dad's retirement. Len married Carolyn Weiland on July 12, 1986 at St. Paul Lutheran Church in Hampton, Iowa making their home at 1991 Highway 3. Traveling became a favorite when Len found a help mate to pack his suitcase. In the past 24 years they visited 52 countries around the world. Len and Carolyn also spent the past number of years in the winter months on Mustang Island, Corpus Christi, Texas. Len will be remembered for his fairness, honesty and integrity as he quietly led with a soft spoken voice. Len was the designer and the inventor of the "Calf Tote" carrier for new born calves. The Commissioner of Patents and Trademarks presented the patent and was granted in February 1992. He entered his idea in the American Farm Bureau Federation farmer idea exchange contest at the Iowa State Fair and won in the Livestock category which made him eligible to compete in the Kansas City AFB Idea Exchange. He also designed a portable cattle chute for treating cattle and little calves, and also designed a hay un-roller that attached to the back of his pickup for feeding cattle during the winter months. Len was always seeking to find labor saving techniques to make work on the farm more efficient and easier. Len is survived by his wife Carolyn, two step children - Shawna (Robert) Szalwinski, Corpus Christi, Texas; Rodney (Lauren) Weiland, of Louisville, Kentucky; and two step granddaughters, Mackenzie and Maddie Weiland; a sister Mildred Hendrickson; brother Clifford (Ruth) Berghoefer and Delbert (Linda) Berghoefer; 4 nieces, Cinda Barz, Lora Duncan, Kristyn Mostek, and Kari Subbert. Two nephews, Bret Berghoefer, Chad Berghoefer. Also surviving is his mother in-law Mavis Seidel, Northwood, Iowa. He was preceded in death by his parents, brother in-law John Hendrickson and father in-law Frank Seidel. Memorials may be directed to Hospice of North Iowa or to the family.

The family of Leonard A. Berghoefer created this Life Tributes page to make it easy to share your memories.

Send flowers to the A. Berghoefer family.