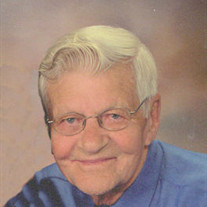 Leonard Philip Pecha, 84, of Dumont, Iowa, passed away January 27, 2011, at the Franklin General Hospital in Hampton, Iowa. He was born December 26, 1926, in Goltry, Oklahoma, to Charles Vincent and Mary Frances (Skoda) Pecha. Leonard attended Goltry High School in Goltry, Oklahoma. He served his Country in the United States Army as a Corporal in Company F 38th Infantry Regiment. Leonard married Mary Lutz on September 7, 1953, in Wichita, Kansas. He worked as a screen printer at Cessna Aircraft for 10 years in Wichita, Kansas from 1950 to 1960 when the family moved to Iowa. He then worked for the Hansell Elevator for 37 years until his retirement in 1998. Leonard enjoyed playing cards, working in his vegetable garden, working on cars with his sons and fishing. He was a member of the St. Francis Catholic Church in Dumont until it closed then they transferred their membership to the St. Patrick's Catholic Church in Hampton. Leonard is survived by his wife Mary Evelyn Pecha of Dumont, son Richard (Terry) Pecha of Latimer, son Stanley (Denise) Pecha of Dumont, son Dale (Verla) Pecha of Dumont, daughter Beverly (Mike) Barber of Dumont, son Wayne (Janet) Pecha of Dumont, daughter Mary Elizabeth Pecha of Dumont, sister Eva Severin of Lahoma, Oklahoma, brother Edward Pecha of Goltry, Oklahoma, fifteeen grandchildren and fifteen great grandchildren. Leonard is preceded in death by his parents, three brothers and four sisters. Burial will be in the Dumont Cemetery. Rosary service will be at 5 PM Sunday at the Sietsema-Vogel Funeral Home in Dumont.

The family of Leonard Philip Pecha created this Life Tributes page to make it easy to share your memories.

Send flowers to the Pecha family.