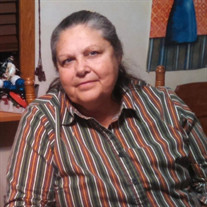 Linda Van Kooten, 75, of Iowa Falls, passed away Monday, January 3, 2022 at her home. A memorial visitation will be held from 11:00 AM until 1:00 PM on Friday, January 7, 2022 at the Counsell Woodley Funeral Home in Iowa Falls. Following visitation, she will be laid to rest with a private family graveside inurnment at the Union Cemetery. Counsell Woodley Funeral Home of Iowa Falls is caring for Linda and her family. Linda Ruth Van Kooten was born on January 27, 1946 to Len and Nellie (Booy) Spencer in Des Moines, Iowa. She graduated from Pella Christian High School. On February 1, 1962 Linda was united in marriage to Elvin Van Kooten in Pella, Iowa. Linda always loved to travel with Elvin in their 38’ Chevy Coupe to car shows and across the country to national car shows. Early in their marriage they spent a lot of time outdoors camping and fishing, which later turned into camping weekends with family and friends. One of the things she really enjoyed and took a lot of pride in was sitting in the stands cheering on her kids, her grandchildren and great- grandchildren at sporting events. One of Linda’s special interests was Boston Terriers. She was very active in several Boston Terrier Clubs. She enjoyed showing her Boston Terrier, Riley, in the ring at competitions. Linda was probably best known for her upholstery work. She owned and operated her own business in Iowa Falls for 48 years. Linda Van Kooten is survived by her husband, Elvin Van Kooten of Iowa Falls, Iowa; children, Lora (Tim) Andera of Volga, South Dakota and Leslie (Dani) Van Kooten of Williams, Iowa; grandchildren: Kimberly Andera, Steven Van Kooten, Jamie Andera, Bryce Kauffman, Devyn Van Kooten, Cody Van Kooten and Peyton Kauffman and a brother, Bob (Karen) Spencer of Pella, Iowa. She was preceded in death by her parents and a son, Craig Steven Van Kooten.

Linda Van Kooten, 75, of Iowa Falls, passed away Monday, January 3, 2022 at her home. A memorial visitation will be held from 11:00 AM until 1:00 PM on Friday, January 7, 2022 at the Counsell Woodley Funeral Home in Iowa Falls. Following visitation,... View Obituary & Service Information

The family of Linda Van Kooten created this Life Tributes page to make it easy to share your memories.