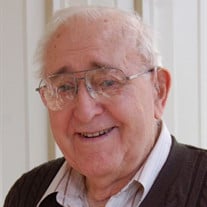 Lloyd Ellis Dodd, 94, of Hampton, Iowa, passed away Thursday, April 13, 2017, at Franklin Country View Nursing Facility in Hampton. He was born on July 30, 1922, on a farm west of Chapin, to William Arthur Dodd and Stella Crain Dodd. Lloyd graduated from Chapin High School. He was united in marriage to Elvera Ruth Johansen on June 28, 1945, in Chapin, Iowa. Lloyd farmed in the Chapin and Aredale areas. He also sold insurance and real estate and worked for the government in crop information. Lloyd was a member of the Hampton United Methodist Church. He was on the Farmers Elevator Board, the Rockwell Telephone Board and the Franklin County Conservation Board. Lloyd, in retirement, enjoyed crossword and number puzzles, tinkering with things to make or improve, and taking part in games with other residents at Apple Valley. He always said the benefits of retirement were doing things slower at a more relaxing speed and not at all if so desired. Lloyd also enjoyed watching sports, western movies and many other TV shows. He is survived by his wife of seventy-one years, Elvera Dodd of Hampton, son Donald Dodd of Hampton, son Dale and wife Shelley Dodd of Hampton, son Kenneth and wife Doreen Dodd of Hiawatha, grandchildren Melinda and husband Dereck Klaassen of Des Moines, Jennifer and husband Joe Cox of Urbandale, Tom and wife Tina Dodd of Dexter, Minnesota, Bryce Dodd of Hampton, Todd and wife Keri Dodd of Marion and Jason and wife Molly Dodd of Hiawatha, great-grandchildren Ryan, Alex, Morgan, Matthew, Megan, Sam, Bianca, Abigail, Carter, Kiana, Ellis, Kaylea, Olivia, and Everett, along with many nieces and nephews. Lloyd was preceded in death by his parents William and Stella, sisters Esther and Mabel and brothers Wayne and Harold.

The family of Lloyd Ellis Dodd created this Life Tributes page to make it easy to share your memories.

Send flowers to the Dodd family.