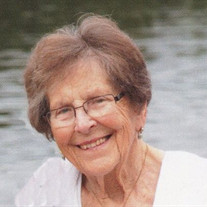 Lois Oneta (Zimmerman) Johnson, 89, from Hampton passed away Friday August 1, 2014 at the Hospice of North Iowa in Mason City. Lois was born on August 22, 1924 the daughter of Charles and Jennie (Fleming) Zimmerman. She attended country school in Benezette township and graduated from Aredale Community School in 1924 where she enjoyed playing softball. Lois was united in marriage to C. Duane Johnson on June 30, 1951 at the Aredale Methodist Church. She dedicated her life to farming, retiring in 1989. She spent her retirement years in Hampton, most recently at the Wellness Center in Dumont. Lois was a lifetime member of the Aredale United Methodist Church where she taught Sunday school, volunteered on several committees and shared her love of music by serving as a church pianist. Lois was a 50-year member of the Eastern Star and belonged to the Dumont American Auxiliary Legion. Lois dedicated her life to her faith, family and community. Her greatest joy came from spending time with her family. She also enjoyed giving of herself by serving and caring for others. She was known for providing delicious homemade pies throughout her community. Lois will be greatly missed by all who knew and loved her. Lois is survived by her three children and families, Pam and Dave Rusinack of Sheffield, Mark Johnson of Greene and Judy Thomas of Marshalltown, Kent and Kelly Johnson of Woodbury, Minnesota. Seven grandchildren, Nathan Rusinack, Nicole Rusinack, Cie Ann (Johnson)and Zach Stien, Alex Johnson, Lauren Johnson, Jill Thomas and Julie Thomas; two great grandchildren Adelyn Stien and Cale Stien; her sister Phyllis (Zimmerman) Noelting and a special niece Donice (Noelting) Raisch; three sister-in-laws Muriel Johnson, Pat Schumacher and her husband LaVerne, and Maxine Johnson; and a host of other family and friends. She was preceded in death by her parents, husband, grandchild, nephew and daughter-in-law. In lieu of flowers, a memorial fund has been established at Hospice of North Iowa.

Lois Oneta (Zimmerman) Johnson, 89, from Hampton passed away Friday August 1, 2014 at the Hospice of North Iowa in Mason City. Lois was born on August 22, 1924 the daughter of Charles and Jennie (Fleming) Zimmerman. She attended country school... View Obituary & Service Information

The family of Lois O. Johnson created this Life Tributes page to make it easy to share your memories.

Send flowers to the Johnson family.