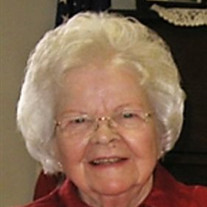 Lois Berniece (Dirksen) Paullus, 96, of Hampton, Iowa, passed away Tuesday, August 8, 2017 at the Franklin Country View Nursing Facility in Hampton, Iowa. She was born March 5, 1921 in Alexander, IA to Sadie (Jones) and George Dirksen. She attended Geneva country school and graduated from Hampton High School in 1939. On February 8, 1940, she was united in marriage to Robert F. Paullus at the Little Brown Church in Nashua, Iowa. Bob and Lois lived and raised their five children in Sheffield, Eagle Grove, and Hampton. She was beloved by, and devoted to, her family all her life. She was the definition of her generation: hard-working, unselfish, giving, humble and kind. She was a member of the United Methodist Church in Geneva, IA. Lois is survived by her five children, Larry (Inez) Paullus, of Lake Havasu, AZ, Pamela (Robert) Shaw of Hampton, IA, Darrell (Mary Alice) Paullus of Hampton, IA, Steven (Anne) Paullus of Marshalltown, IA, and Denise (Wayne) Bunting, of Cookeville, TN, ten grand children, 21 great-grand children, and four great-great grand children. Lois was preceded in death by her parents, her husband, Robert, and five siblings. Memorials may be directed to Hospice of North Iowa.

The family of Lois Berniece Paullus created this Life Tributes page to make it easy to share your memories.

Send flowers to the Paullus family.