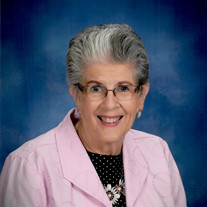 Lorae Nieuwendorp, 86, of Iowa Falls, passed away Wednesday, March 30, 2022 at Ashbrook Assisted Living in Iowa Falls. Funeral services will be 1:00 PM Tuesday, April 5, 2022 at the Counsell Woodley Funeral Home in Iowa Falls. She will be laid to rest at the Union Cemetery. Visitation will be from 11:00 AM until service time on Tuesday. Counsell Woodley Funeral Home of Iowa Falls is caring for Lorae and her family. Lorae Joan (Ingalls) Nieuwendorp was born on December 14, 1935 to Vernon and Carrie (Diekevers) Ingalls in Rock Rapids, Iowa. Lorae graduated from Sheldon High School and then attended Ellsworth Community College. In December 1954 Lorae was united in marriage to Robert Shane at the Methodist Church in Sheldon, Iowa. The couple later divorced. Lorae kept busy as a full-time mother, attending all her children’s school activities and working as a medication aide. In October 1986, Lorae married Harold Wilson at the First United Methodist Church in Iowa Falls, Iowa. He passed away in January, 2000. October 2013, Lorae was united in marriage to Don Nieuwendorp at the Central Baptist Church in Sioux City, Iowa. She enjoyed her retirement years with Don at their home in Sioux City, Iowa. Music was a big part of her life; she belonged to various music organizations and wrote her own music. She enjoyed playing cards and morning coffee with friends at Hy-Vee. She also enjoyed being outside taking care of her beautiful yard and flowers. Lorae’s grandchildren have always been a very important part of her life and knew her as “Gramma Rae or Nana.” When she talked to her children or grandchildren on the phone, she would always end the call by saying “Love you, bye” which they all still do to this day. Lorae Nieuwendorp is survived by her husband, Don Nieuwendorp of Sioux City, Iowa; children, Steven R. (Kim) Shane of Iowa Falls, Iowa, Terry L. Shane of Iowa Falls, Iowa, Judith R. (Dennis) Hanson of Alden, Iowa, Carol R. (Walter Mahaney) Shane of Merit Island, Florida and Regina R. Shane of Cape Canaveral, Florida; eight grandchildren; six great-grandchildren and four great-great grandchildren. She was preceded in death by her parents, Vernon and Carrie Ingalls; grandson, Burkley Shane; first husband, Robert Shane; second husband, Harold Wilson and step-mother, Irene Ingalls.

Lorae Nieuwendorp, 86, of Iowa Falls, passed away Wednesday, March 30, 2022 at Ashbrook Assisted Living in Iowa Falls. Funeral services will be 1:00 PM Tuesday, April 5, 2022 at the Counsell Woodley Funeral Home in Iowa Falls. She will be laid... View Obituary & Service Information

The family of Lorae Joan Nieuwendorp created this Life Tributes page to make it easy to share your memories.

Send flowers to the Nieuwendorp family.