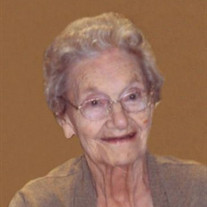 Lois Lorraine Porter, 91, of Hampton, Iowa, formerly of Geneva, passed away Sunday morning, June 1, 2014, at the Franklin Country View Nursing Facility in Hampton under the care of Hospice of North Iowa. Lorraine Monroe was born June 12, 1922, the youngest daughter of Harry and Marie Monroe, along with two brothers and two sisters, on a farm near Van Cleve, Iowa. She graduated high school in Van Cleve and attended Marshalltown Community College. Lorraine married Dale Porter on September 15, 1941. They farmed in the Geneva, Iowa, area for their entire life. Lorraine was Dale's farming partner, laborer and wife, until retiring and moving to Hampton in 1988. Lorraine enjoyed sports and was an avid Iowa State fan. She also enjoyed watching her grandson play football, wrestle and successfully show his cattle. Lorraine was one of the founding members of the First Christian Church, where she was on many church and CWF committees. She was also a member of the American Legion Unit 0183 and the Hospital Auxiliary. Lorraine is survived by her son Lynn (Jamie) Porter of Geneva and grandchildren Nicole, Troy and Kyle Porter and Jason Merfeld. Lorraine was preceded in death by her son Larry, husband Dale, parents Harry and Marie, two brothers and two sisters. Burial will take place in the Pleasant Hill Cemetery in rural Ackley, Iowa. Memorials may be directed to the family.

The family of Lorraine Porter created this Life Tributes page to make it easy to share your memories.

Send flowers to the Porter family.