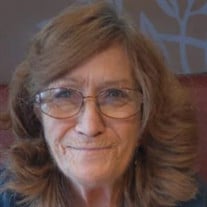 Louise Duryee was a born-again Christian. She believed that God died for her sins, and she accepted Him into her heart, that she might have eternal salvation. That eternal salvation was granted unto her on Sunday, November 28, 2021 at 3am, when she went to be with the Lord. She was born September 8, 1949 to Oscar and Elsie (Haack) Romer. Louise attended Church services at Calvary Baptist Church, Greene, during her children's younger years. Later she attended services at the First Baptist Church, Rockwell, as her children grew up and slowly graduated, married, and moved away. Louise made sure that all of her children had been given the chance to hear the Gospel message, so that they too, could been given the choice to accept Jesus as their personal savior. You could often find Louise preparing meals to honor her husband, Arnold Duryee, and the family they had made. Sit down meals were a staple of the time growing up. When it came time for wrestling season, you could hear Louise on the side of the mat pouring her heart and soul into backing up her kids to be the best that they could be. When it came time for the Christmas season, she made sure that nobody went without. When it came time to loving on her grandkids, she made sure they always had a full belly. Louise is survived by her husband Arnold, Charles City; 10 Children: Todd (Lori), Charles City; Troy (Becky), Marble Rock; Scott (Jackie), Kansasville, WI; Wally (Lexi), Gouldburn, ASTL; Luanne (David) Prescott , Charles City; Deb Lemere (Scott Dickson), Clear Lake; Dale (Samantha) Duryee, Charles City; Ervin Duryee, Cedar Rapids; Chris (Raven) Duryee, Mason City; Step-daughters: Sasha Davis, Rockton, IL; Angelique Duryee, Rockton, IL; 29 grandchildren; 17 Great Grandchildren; Siblings: Nancy Eisenbacher; many nieces, nephews and friends. She is preceded in death by her parents; son, Roger Duryee, sisters Debra Jennings and Marie Farrell and brothers: Oscar Romer, Jr, and Roger Schumacher. A Celebration of Life for Louise will be held 10:00 a.m., Saturday, January 15, 2022 at the First Baptist Church in Rockwell, Iowa. Burial will be at Hillside Cemetery in Marble Rock at a future date Never a goodbye... See you later... Expressions of sympathy may be sent to Louise Duryee c/o Retz Funeral Home, PO Box 219, Greene, IA 50636 and they will be forwarded to the family.

Louise Duryee was a born-again Christian. She believed that God died for her sins, and she accepted Him into her heart, that she might have eternal salvation. That eternal salvation was granted unto her on Sunday, November 28, 2021 at 3am,... View Obituary & Service Information

The family of Louise M Duryee created this Life Tributes page to make it easy to share your memories.

Louise Duryee was a born-again Christian. She believed that God...

Send flowers to the Duryee family.