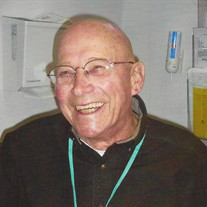 Lowell A. Stock, 79, of Hampton, Iowa, passed away Friday, January 4, 2013, at the Franklin General Hospital in Hampton, Iowa. He was born January 4, 1934, in Butler County, Iowa, to Earl August & Effie (Molencamp) Stock. Lowell graduated from Hampton Community High School in Hampton in 1951. He served his country in the United States Navy from 1951-1954. Lowell married Patricia Colleen Granau in Dows, Iowa, on July 13, 1957. He worked for the United States Postal Service and as a school bus driver. Lowell was a member of the First Congregational United Church of Christ in Hampton, American Legion. Family always came first, but golf, coaching youth baseball, and raising and showing Pinto horses were also important. Lowell managed to experience a lot of living in 79 years. He loved time spent with his children and grandchildren. Daughter Sue excelled in horseback riding and showing as well in high school softball. Shane's baseball and wrestling were fun to watch and sometimes quickened his heartbeat. Brit, who spent many summers with us was always his "Angel Face." Madi's dancing and cheerleading were very special and Tanner's baseball and football were always fun to watch, win or lose. Playing cribbage with brother-in-law Jerry also filled many happy hours as well as time spent playing "Farkle" with family and friends. Lowell is survived by his wife Patricia Stock of Hampton, daughter Susan Cook and her husband Kim West of Des Moines, son Shane and wife Peg Stock of Gretna, Nebraska, grandchildren Brittany, Madison and Tanner Stock of Gretna, Nebraska, sister-in-law Lois Stock of Dumont, sister-in-law Frances Stock of Newton, sister Carol and husband Richard Miller of Mesa, Arizona, sister Louella and husband Jerry Miller of Hampton and a number of nieces and nephews. He was preceded in death by his parents, brothers Frances and Dilman, sisters Maxine and Virginia, nephew Randy Stock and niece Denise Miller. Memorials my be directed to the First Congregational United Church of Christ in Hampton. Visitation will be held on Tuesday, from 4-7 p.m. at the Sietsema Vogel Funeral Home in Hampton. A private family memorial service will be held at a later date at the Iowa Veterans Cemetery in Van Meter, Iowa. www.sietsemavogelfuneralhomes.com 641-456-3232

The family of Lowell A. Stock created this Life Tributes page to make it easy to share your memories.

Send flowers to the Stock family.