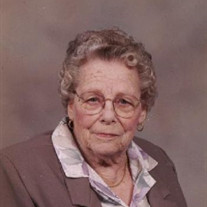 Lucile Edith Dohrmann, 93, of Arlington, Texas, formerly of Hampton, Iowa, passed away Saturday, August 13, 2011, at Arlington Memorial Hospital in Arlington, Texas. She was born to Edward and Edith Rinehimer on May 9, 1918 in Webster City, Iowa. In 1936, she graduated from Lincoln High School in Webster City. That summer, she entered Thompson's Beauty School in Des Moines and graduated from there in 1937. She was employed as a cosmetologist in shops in Webster City. In 1939, a beauty school friend asked her to work with her in Hampton. It was in Hampton that she met her future husband, Willard Dohrmann. They were married on May 24, 1942 in Webster City and made their home on the family farm near Beed's Lake. She had always lived in the city, but now became a farmer's wife, which she dearly loved. They resided on their farm until 1987, at which time they moved to Hampton. They enjoyed fifty four years of married life together. After Willard's death on February 4, 1997, Lucile moved to an apartment in Hampton and remained there until moving to an assisted living facility in Arlington, Texas in January 2010 to be near family. In addition to her farm work, Lucile enjoyed reading, needlepoint, embroidery, and word search puzzles. She especially enjoyed playing 500, Skip-Bo, Dominoes, Phase 10, and other activities at the assisted living. Lucile had been a DAR member and was an active member of Immanuel United Church of Christ in Latimer, where she had been a Sunday School teacher, choir member, and served on several committees. One of her greatest joys was spending time with her family, especially her two granddaughters and triplet great grandchildren. Left to cherish her memory is her daughter Ruth (Roger) Koopman of McKinney, Texas, two granddaughters Sara (Tony) Landin of Arlington, Texas, Beth Koopman of Lewisville, Texas, and three great grandchildren, Brian, Joshua, and Emily Landin of Arlington, Texas. Lucile was preceded in death by her parents, Edward and Edith Rinehimer, her husband, Willard Dohrmann, three brothers, George, Ralph, and twin brother Lloyd Rinehimer, and sisters Clarabel Volker and Marion Doolittle. Burial will be in the Hampton Cemetery. Memorials may be directed to the family.

Lucile Edith Dohrmann, 93, of Arlington, Texas, formerly of Hampton, Iowa, passed away Saturday, August 13, 2011, at Arlington Memorial Hospital in Arlington, Texas. She was born to Edward and Edith Rinehimer on May 9, 1918 in Webster City,... View Obituary & Service Information

The family of Lucile Edith Dohrmann created this Life Tributes page to make it easy to share your memories.