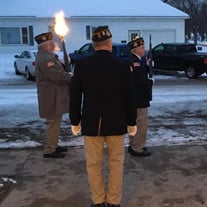 LuVern Ruiter, 89, of Thornton, passed away Saturday, January 8, 2022, at the Sheffield Care Center. Private family services will be held at Counsell Woodley Funeral Home, Thornton with Rev. Rodney Meeester, of the First Reformed Church, Meservey, presiding. Interment with Veteran’s Honors will be at Pleasant View Cemetery, Thornton. LuVern Myron Ruiter was born on the farm near Meservey, Iowa March 20, 1932, the son of Fred and Tena (Gruis) Ruiter. He was raised at Meservey attending country school and graduating from Meservey High School with the class of 1950. LuVern entered the U.S. Army and served in the Korean War. He returned home and while working as a truck driver and helping his father on the family farm he met Dorothy Ewing, a new school teacher in Meservey. They were married June 10, 1955 at the Methodist Church in Thompson. The couple bought a farm north of Thornton and raised their three children there. In 1981 they moved into Thornton and worked for Farm Service and the Coop until retiring at the age of 80. LuVern was active in the First Reformed Church, the American Legion and the Thornton Lion’s Club. He was a tinkerer and Jack-of-all-trades, woodworker and loved to go up north fishing. Family includes his wife of 67 years, Dorothy; children: Darwin (Jane) Ruiter, Thornton; Corinne (Don) Walker, Nora Springs; Scott Ruiter, St. Cloud, MN; grandchildren: Tyrell Walker and Whitney Johnson; step-grandchildren: Leigh McCready, Danielle Brady and Ashley Sharum; 2 great grandchildren and step-great grandchildren; sister Maurine Nash and in-laws: Barb (Forey) Thompson and Millie Verlo. LuVern is preceded in death by his parents, sisters: Viola Kessler, Leona Orvick, Diane Ruiter and brother Dale Ruiter.

The family of LuVern Ruiter created this Life Tributes page to make it easy to share your memories.

Send flowers to the Ruiter family.