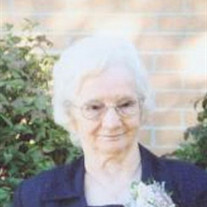 Margaret Ruth (Migell) Dralle, 92, of Allison, Iowa, passed away on February 6, 2012 at the Rehabilitation Center of Allison in Allison, Iowa. She was born October 10, 1919, in Verndale, Minnesota to Raymond and Alma (Tuil) Migell. Margaret made her home with her grandparents, Mr. and Mrs. John Tuil, until she was eleven years old. She then came to Iowa and made her home with her aunt and uncle, Mr. and Mrs. Chris Kampman, where she stayed until she was married. On February 16, 1942, Margaret was united in marriage to Vern Dralle. He preceeded her in death December 26, 1975. They were blessed with two daughters, Patricia Gardzalla and Delores (Darwin) Winkowitsch. Margaret was a member of St. James Lutheran Church in Allison. She babysat for many children in Allison for years, and loved it. She especially enjoyed time with her grandkids and great grandkids. Margaret loved reading and making quilts for all of her grandkids and great grandkids. She loved the time with her family and all of the visits and calls. Margaret is survived by two daughters, Patricia Gardzalla of Pooler, Georgia and Delores (Darwin) Winkowitsch of Allison, Iowa, four grandsons, Darren (Monica) of Cedar Falls, David (Kathi) of Reinbeck, Doug (Kara) of Manchester and Tom Gardzalla of Pooler, Georgia, and a granddaughter, Ann (Jeff) Alberts of Pooler, Georgia. She was blessed with numerous great granchildren and great great grandchildren. She is survived by two sisters, Lois Remackel of Linn Croot, Missouri and Opal Riddish of Vacasville, California. She was preceded in death by her husband, Vern, her parents, a son in law, Patrick Gardzalla, a great granddaughter, Hope, and two sisters, Georgella Olson and Mary Arjes. Burial will take place at the Allison cemetery in Allison, Iowa

Margaret Ruth (Migell) Dralle, 92, of Allison, Iowa, passed away on February 6, 2012 at the Rehabilitation Center of Allison in Allison, Iowa. She was born October 10, 1919, in Verndale, Minnesota to Raymond and Alma (Tuil) Migell. Margaret... View Obituary & Service Information

The family of Margaret Ruth Dralle created this Life Tributes page to make it easy to share your memories.

Send flowers to the Dralle family.