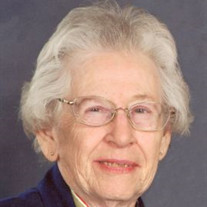 Margaret Gerdes, 84, of Dumont, Iowa, passed away Wednesday, June 4, 2014, at Franklin General Hospital in Hampton, Iowa. Margaret Evelyn (Becker) Gerdes was born May 6, 1930 to John and Helen (Folkers) Becker at Ackley, Iowa. She graduated from Ackley High School in 1948. Following graduation, Margaret worked at Rath Packing in Waterloo, Iowa, but the love of a farmer moved her to the farm. She married Paul H. Gerdes on September 1, 1950 at St. John's Evangelical Reformed Church in Ackley, Iowa. She and Paul made their home for 60 years in the same house he was born in. Margaret loved living in the country and the farm way of life. Margaret was a member of the Dumont Reformed Church and previously taught Sunday School and catechism for many years, Butler County Farm Bureau Women, Butler County Farm Bureau membership campaign chair, Butler County Extension Council, the Republican party, worked tirelessly on Relay for Life and was the area American Cancer Society daffodil chairperson for many years. She and Paul enjoyed their camaraderie with the IPLA (Interstate Producers Livestock Association) board of directors, of which Paul was a member. She and Paul also enjoyed their fellowship and service as Gideons. Margaret was also an important part of supporting Paul and his lay speaking at area churches. Margaret enjoyed crocheting and saw to it that each of her children and grandchildren had a specially made afghan. She worked at Cropmate and J&C Grocery for many years as a clerk and enjoyed her 'social' time there. To say she loved her job as hostess at Sietsema-Vogel Funeral Home in Dumont is an understatement. Although it meant a sad occasion for her to go to work, she enjoyed greeting people and treating the deceased with the utmost respect and dignity. Margaret is survived daughter Marilyn (Roger) Freeman, son Mark (Deb) Gerdes, grandchildren David (Shanna) Freeman, Andrea (Derek) Nyhus, Jodi (Harv) Demuth, Kelli (Shane) Roenfanz, and Maggie Gerdes, great grandchildren Tyler, Josephine, Morgan, Annie, Max, Bryce, Grant, sister Hazel Fuller, brother-in-law Herman (Donna) Gerdes, and sister-in-law Darlene Gerdes. She was preceded in death by her husband, her parents, infant brother, sister Dorothy Freese, brothers-in-law Russell Fuller, Frederick Freese, and Robert Gerdes. Burial will take place in the Dumont Cemetery.

The family of Margaret Evelyn Gerdes created this Life Tributes page to make it easy to share your memories.

Send flowers to the Gerdes family.