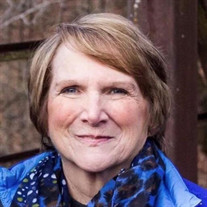 Per request of the Blanchard family, the funeral mass for Marilyn Blanchard has been postponed until 11:00 AM on Tuesday, January 18, 2022 at St. Mark Catholic Church in Iowa Falls. Visitation will be from 9:30 AM until service time on Tuesday at the church. Marilyn Blanchard, 73, of Ankeny and formerly of Iowa Falls, passed away Monday, January 10, 2022 at Edencrest in Ankeny. Funeral mass will be 11:00 AM on Tuesday, January 18, 2022 at St. Mark Catholic Church in Iowa Falls. She will be laid to rest at a later date at the Iowa Veterans Cemetery. Visitation will be from 09:30 AM until service time on Tuesday at the church. Counsell Woodley Funeral Home of Iowa Falls is caring for Marilyn and her family. Those planning an expression of sympathy may wish to consider memorials to the family which will be designated to assist with Alzheimer's research. Marilyn Elizabeth Blanchard was a caring wife, mother, grandmother, mother-in-law, daughter, sister and friend. She left this world peacefully on January 10, 2022, at the age of 73. Marilyn Elizabeth Blanchard was born on July 23, 1948 to Jim and Dorothy (Moran) Barnes in Anamosa, Iowa. Marilyn spent her childhood in Springville. She attended sporting events with her dad and brothers and learned how to become a homemaker from her mother. After graduating from high school, she attended Kirkwood Community College in Cedar Rapids. She obtained her License of Practical Nursing. In December of 1969, Marilyn was set up on a blind date with Timothy Blanchard and they were married on July 11, 1970. Tim and Marilyn lived in Vinton and together they had five children: Mike, Chris, Molly, Amy and Aaron. Tim and Marilyn moved their family to Iowa Falls in 1980 and spent 38 years raising children, being business owners and enjoying their community by the river. Besides being a homemaker, throughout her life, Marilyn taught nursery school at Community Nursery School, she owned and managed the Candy Connection and Wagon Wheel, she also managed the Boyt Outlet Store, and nursed at Scenic Manor. In 2018, Tim and Marilyn moved to Ankeny to be closer to their grandkids. Marilyn loved spending time cheering on her children and grandchildren at various sporting events. She lived for vacationing with her family at the lake. She treasured the time spent on the boat with her children and her grandkids. She always had an open table for friends and family to enjoy good conversation and cookies. She looked forward to her friends coming over to play cards and games. Marilyn also loved her dogs as much as people and loved taking them on walks to the park. Times such as these filled Marilyn’s heart and were what she carried in her memories throughout these past few years. As a young girl, Marilyn wrote of her dream to be a good wife and mother. She enjoyed a great life of dreams fulfilled. Even in her final days, when asked how she was doing, Marilyn would smile and say, “Pretty good for an old lady.” Although her memories started to fade, her sense of humor and caring spirit was forever present and comforting. Marilyn Blanchard is survived by her husband, Timothy Blanchard of Ankeny, Iowa; children, Mike Blanchard of Chigasaki, Japan, Chris (Kristy) Blanchard of Polk City, Iowa, Molly (Sam) Wendel of Polk City, Iowa, Amy (Aaron) Witt of Johnston, Iowa and Aaron (Rakhi) Blanchard of Las Vegas, Nevada; grandchildren: Sophie, Drew and Ian Blanchard, Kennedy, Mia and Morgan Wendel, Holden, Henry and Harper Witt, Ariya, Sierra Nathu and Juhl Blanchard. She is also survived by her brothers, Bill (Marlene) Barnes of Anamosa, Iowa and Chuck (Mary) Barnes of Anamosa, Iowa and many nieces and nephews. She was preceded in death by her parents, Jim and Dorothy Barnes.

Per request of the Blanchard family, the funeral mass for Marilyn Blanchard has been postponed until 11:00 AM on Tuesday, January 18, 2022 at St. Mark Catholic Church in Iowa Falls. Visitation will be from 9:30 AM until service time on Tuesday... View Obituary & Service Information

The family of Marilyn Blanchard created this Life Tributes page to make it easy to share your memories.

Per request of the Blanchard family, the funeral mass for Marilyn...

Send flowers to the Blanchard family.