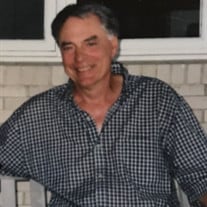 Mark Franklin Honeck, 69, of Hampton, passed away Wednesday, January 10, 2018, at his home in Hampton. He was born March 22, 1948, in Hampton, Iowa, to Frank and Marellyn (Luscombe) Honeck. Mark graduated from Hampton Community High School in Hampton and attended Ellsworth Community College in Iowa Falls, Iowa. Mark served his country in the United States Army. He was united in marriage to Pamela Connelly in 1970, in Nashua, Iowa, the marriage later ended in divorce. Mark worked as a Lineman for IPS and MidAmerican Energy in Hampton for over 35 years. He was a member of the Hampton Country Club and the Hampton United Methodist Church. Mark enjoyed golfing, gardening, fishing, planting trees and volunteering his time at the Hampton Country Club. He was an avid Iowa Hawkeye fan and enjoyed sports, including bowling and coaching his son, Cole, in Farm League and Little League baseball. Mark is survived by his son Cole (Ellen) Honeck of Centennial, Colorado, daughter Robyn (Doug) Pralle of Hampton, granddaughter Haley Honeck of Centennial, Colorado, grandson Allen (AJ) Honeck of Centennial, Colorado, sister Kayleen Polichetti of Honolulu, Hawaii. He was preceded in death by his parents.

The family of Mark F. Honeck created this Life Tributes page to make it easy to share your memories.

Send flowers to the Honeck family.