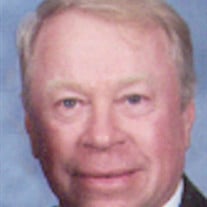 Marlin G. Hopkey, 63, of Alexander, Iowa, passed away July 7, 2010, at the Mercy Medical Center North Iowa in Mason City. He was born October 22, 1946, in Belmond, Iowa, to Marvin Carl and Clara Mabel (Waltzing) Hopkey. Marlin attended Alexander Consolidated School until 1962, then CAL Community Schools, where he graduated in 1964. After high school in 1964 to 1968 he attended the University of Northern Iowa in Cedar Falls, Iowa, where he graduated with a Bachelor of Arts Degree and was a member of the Kappe Pl Honorary Fraternity. He served his country in the United States Navy during the Vietnam War from 1968 to 1972. Marlin was married on March 3, 2003, at the St. John's Lutheran Church in rural Hampton, Iowa, to Margaret Miller. He was a member of the Immanuel United Church of Christ in Latimer, Iowa. Marlin worked as a farmer until 2001 and then went to work for Latham Hi-Tech Seed Company. Marlin enjoyed traveling, watching NASCAR racing, gardening, his dog (Sadie), and getting his family together for special occasions. He took great pride in having a nice yard and garden and he loved farming, making sure that everything was just right while he farmed. Marlin is survived by his wife Margaret "Maggie" Hopkey of Alexander, daughter Lisa & husband Michael Foth of Maui, Hawaii, daughter Diane Hackney-Jungck of Hampton, son Jesse & wife Lisa Furman of Popejoy, sister Delorus "De" Modderman of Redwood City, California, grandchildren Kevin Foth, Zachary Hackney, Brittany Hackney, Jacob Jungck, Anya Jungck, great-grandson Tristan. Marlin is preceded in death by his parents and brother-in-law Vernon Modderman. In lieu of flowers memorial may be made to the family.

The family of Marlin G. Hopkey created this Life Tributes page to make it easy to share your memories.

Send flowers to the Hopkey family.