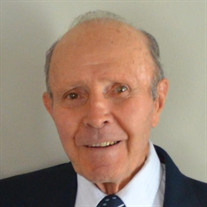 Marlo Westaby, 94, of Alexander, passed away Friday, March 18, 2022, at the Madrid Home. Funeral service will be held at 1:00 p.m., Saturday, April 9, 2022, at the First Reformed Church in Alexander. Visitation will be held from 11:00 a.m. to 12:30 p.m., prior to the service at the church. Burial will take place at the Alexander Cemetery. The Counsell Woodley Funeral Home of Hampton is caring for Marlo and his family. Click here to join live broadcast of Marlo’s Funeral Service Marlo DeWayne Westaby, son of W. C. (Willie) and Etta Westaby, was born on a farm east of Alexander, Iowa on November 3, 1927. Marlo graduated from Alexander High School in 1945. He enlisted in the Naval Reserves and was discharged when WWII ended. Marlo then returned home. He met the love of his life when Gloria Helvick came to Alexander to teach school. They married on July 28, 1948. They bought an old one-room country school and moved it into town where they remained for their married life of 72 ½ years. To this union, they were blessed with six children. Marlo was an entrepreneur at heart. He loved to work on equipment and was always looking for a better way to make things work. He went into custom hay baling with his father. They built homemade tractors that were used to pull the balers. In the late 1950’s, Westaby Truck Line was started doing custom corn shelling and hauling. In the early 70’s, Marlo and Kevin started a farrow to finish hog operation and continued to feed hogs until 2007. In 1975 Marlo and his two sons, Mike and Kevin, bought the grain elevator in Alexander operating Westaby Grain Company until it was sold in 1990. Then, Marlo and Kevin went into custom manure hauling. Marlo retired at the age of 82. He was a lifelong member of the Alexander United Methodist Church until its closing. He served on many church committees and became a certified lay speaker serving several area churches. Marlo loved his music! He was a member of the River City Barbershop Chorus in Mason City for over 50 years. A highlight for him during one of the annual Barbershop Shows was when he and Gloria did a ballroom dance scene while the chorus sang. He also sang the lead part in the Alexander Harmonizers quartet for several of those years. Marlo and Gloria loved to dance! After their children were raised, they started ballroom dancing. They were known to drive many, many miles to listen to a favorite band, anywhere in the Midwest. They gained numerous friends and made even more memories from their years of dancing. He was very proud of his family and loved when everyone was together. He looked forward to attending his daughter’s ballgames, and later many grandchildren’s ballgames, events, and birthday parties. His children and grandchildren will cherish his memory by his sense of humor and teasing, his famous milkshakes with Schwan’s Ice Cream, and his homegrown popcorn. He loved raising chickens, gathering and selling fresh eggs, and the family’s annual chicken butchering day. This is his legacy! Marlo is survived by his daughter Jacki (Wade) Kragel of Waukee, son Kevin (Colette) Westaby of Alexander, daughter Lynette (John) Bednarz of Ellston, daughter Jana (Jeff) Winters of Hampton, daughter Vicki (Farley) Roe of Waterloo, sixteen grandchildren, forty-two great-grandchildren (with one more on the way), sister-in-law Diane (Wayne) Lehman of Badger, along with numerous nieces and nephews. He was preceded in death by his beloved wife Gloria, son Michael, great-grandsons Austin and Alex Rodemeyer, his parents, and two sisters. Memorial contributions may be given to River City Barbershop Chorus, 2032 Hunters Ridge Dr., Mason City, IA 50401 or to Suncrest Home Health and Hospice, 5959 Village View Dr., Suite 100, West Des Moines, IA 50266.

The family of Marlo DeWayne Westaby created this Life Tributes page to make it easy to share your memories.

Send flowers to the Westaby family.