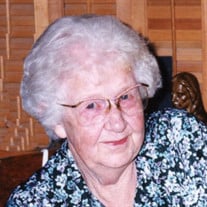 Martha Hansina Miller, 95, of Hampton, Iowa, passed away Saturday, June 16, 2012, at the Rehabilitation Center of Hampton in Hampton, Iowa. She was born March 20, 1917, in rural Franklin County, Iowa, to Frederick and Katrina (Brink) Lund. Martha attended rural Franklin County country schools. She was united in marriage on February 17, 1937, at her parents home in rural Hampton, Iowa, to Alfred C. Miller. Martha worked as a homemaker, nurse's aid, school cook and owned and operated Brun's restaurant in Hampton, Iowa. She was a member of the St. John's Lutheran Church in rural Hampton where she was active in the WELCA women's group. Martha enjoyed spending time with her family especially her grandchildren and great and great great children. She also enjoyed going to the Surf on Saturday nights dancing with her husband Alfred. Martha is survived by her son Dennis and wife Vera Miller of Omaha, Nebraska, daughter Margaret Hopkey of Alexander, five grandchildren Dana, Kara, Lisa, Diane and Jesse, nine great grandchildren and great great grandchildren. She is preceded in death by her parents, husband, one brother, three sisters and her son in law. Burial at the Church Cemetery

The family of Martha H. Miller created this Life Tributes page to make it easy to share your memories.