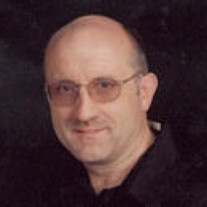 Marvin Gene Hearn, 51, of Dumont, passed away after a three year battle with cancer, and went to live with our Lord on September 12, 2011. Marvin was born on July 8, 1960, to Merle and Beulah (Miller) Hearn of Dumont. Marvin graduated from Dumont High School in 1979. He was a dedicated servant for whatever task called him: Dumont Co-op Elevator, Sukup Mfg., B&B Oil Co., Allison FS, custodian/maintenance/bus driver for Hampton-Dumont Schools, Hearn Propane, and custodian/maintenance for Waverly Shell Rock Schools. Because his health began to fail in December, 2010, he was forced to stop working. He loved working and helping others; he enjoyed camping and traveling when he could. Marvin, along with his brothers and parents, presented concerts in many churches - known as the "Singing Seven" during their younger years. Most of all, he enjoyed spending time with his wife and daughter, Mollie, and also with his extended family. Marvin also served on the Dumont City Council for ten years and currently served as Mayor for Dumont for the past eight years. June 19, 1981, Marvin married Julie Ann Meyer at Trinity Reformed Church, Allison, IA. Together they prayed for a family, which was answered April 1, 2002, with the miracle birth of their daughter, Mollie Ann, a true blessing from our Heavenly Father. Marvin is survived by his loving wife of 30 years, Julie Hearn: one daughter, Mollie Ann, 9, at home; his mother Beulah Hearn of Dumont; four brothers, Lynn (Eunice) of Lehighton, PA, Keith (Vicki) of Mason City, Myron (Alice) of Dumont, and Larry (Michele) of Dumont; his aunt Ruth (Hearn) Siems of Dumont; his mother-in-law, Joyce Meyer of Dumont, sister-in-laws Deb (Harris) Bettenga, Dumont, Jodi (Lane) Tweeten, Bristow, brother-in-laws Dalen (Bridget) Meyer, Dumont and David (Amy) Meyer of Bristow and many nieces and nephews. He was preceded in death by his father, Merle Hearn, in 2001, and father-in-law, Dennis L. Meyer, in 2008. Marvin was an active member of Trinity Reformed Church in Allison where he served several terms as Sunday School Superintendent and on the Consistory. Burial will take place at the Dumont Cemetery in Dumont, Iowa. In lieu of flowers, memorials may be directed to the family at Box 134, Dumont, IA 50625.

Marvin Gene Hearn, 51, of Dumont, passed away after a three year battle with cancer, and went to live with our Lord on September 12, 2011. Marvin was born on July 8, 1960, to Merle and Beulah (Miller) Hearn of Dumont. Marvin graduated from... View Obituary & Service Information

The family of Marvin Gene Hearn created this Life Tributes page to make it easy to share your memories.

Marvin Gene Hearn, 51, of Dumont, passed away after a three year...