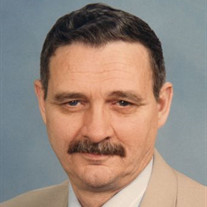 Merlyn Hofer, 81, of Hampton, Iowa, formerly of Toledo, Iowa, passed away Sunday, December 4, 2016, at his home in Hampton. Ernest Merlyn Hofer was born on March 25, 1935, in rural Toledo, Iowa, to Ernest Earl Hofer and Elva Mayetta Violet Stewart. He was baptized at Fairview Methodist Church in rural Toledo. Merlyn received his education in Toledo Public Schools. He was united in marriage to Lauritta Boldt on June 9, 1951, at the Baptist Church in Marshalltown. Merlyn enjoyed farming and that lifestyle for many years. He then worked for Lennox Industries, managed several motels with his wife Lauritta, and most recently worked at Hampton Hardware Store in Hampton. Merlyn was a member of the Hampton Lions Clubs. He enjoyed hunting trips to Wyoming, fishing trips to Canada and Minnesota, traveling with his wife Lauritta, riding on tractors, and listening to country music. Family was the most important part of Merlyn's life. Merlyn and Lauritta would always take their children on family vacations. He had a strong faith and loved his Lord and Savior. Merlyn wanted to set a good example for his children and grandchildren for their own lives. He was a dad, a grandpa and a friend to everyone he knew. Merlyn and Lauritta went to all of their children and grandchildren's numerous activities and events, sometimes traveling many hours. Merlyn is survived by his wife of sixty-five years, Lauritta Hofer of Hampton, son Michael and wife Joanna Hofer of Toledo, daughter Joann and husband Matt Bartleson of Toledo, son Garry and wife Teresa Hofer of Toledo, son Jeffrey and wife Shelly Hofer of Hampton, twenty grandchildren, thirty-three great-grandchildren and fourteen great great-grandchildren. He was preceded in death by his parents Ernest and Elva, sisters Ilene, Dorothy, Geneva, and Waneta, great-grandson Matthew and granddaughter Anna Jo. Memorials may be directed to the family.

The family of Merlyn Hofer created this Life Tributes page to make it easy to share your memories.

Send flowers to the Hofer family.