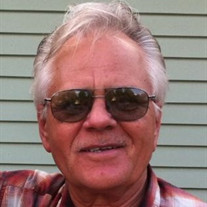 Michael Thomas "Mike" Collins, 65, of Aredale, Iowa passed away Monday January 18, 2016, at his home in Aredale, Iowa. He was born June 5, 1950, in Charles City, Iowa, to Darwin and Jeanette (Geer) Collins. Mike graduated from Sheffield High School in 1968. He served his country in the United States Army. Mike worked as a Supportive Learning Community Coordinator at Liberty Square in Nora Springs, Iowa. He was a member of the Aredale United Methodist Church in Aredale. Mike's hobbies included collecting and working on classic cars/antique bicycles, participating in antique tractor pulls, playing ping-pong & frisbee golf, and eagle watching. His caring nature was evident in the way he showed compassion for animals and people. His smile and laughter was contagious as he would share jokes or funny stories. None of this would have been evident without the support of Alcoholics Anonymous. Thank you to all of those who touched Mike's life in a positive way. He is survived by his daughter Joy (Chris) Bogenrief of Sioux City, son Christopher (Christi) Collins of Warner Robins, Georgia, parents Darwin and Jeanette Collins of Sheffield, brother Timothy (Sue) Collins of Sheffield, sister Patricia (Gene) Person of Des Moines, sister Candyce (Dave) Culp of Mahomet, Illinois, grandchildren Blake, Ben, Adeline Bogenrief, Carli, Cora and Cameron Collins. He was preceded in death by his paternal and maternal grandparents.

The family of Michael Thomas "Mike" Collins created this Life Tributes page to make it easy to share your memories.