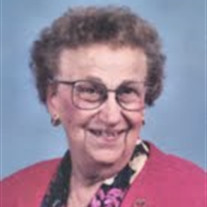 Mildred Pauline Marie Dohrmann, 92, of Hampton, Iowa, formerly of Latimer, Iowa, passed away Friday, April 9, 2010, at St. Luke's Hospital in Cedar Rapids, Iowa. She was born to August and Anna (Meyer) Schaefer on May 7, 1917, on a farm near Sheffield. They later moved to the family farm near Latimer, where Mildred attended Country School through the eighth grade. As a child Mildred helped on the family farm and was also active with youth groups and church activities, where she met her future husband, Ray Dohrmann, a young farmer from the area. On October 28, 1937, Mildred was united in marriage to Raymond Dohrmann at the Marion Center Church in rural Latimer. The couple made their home in the country on Raymond's family farm where they raised their two daughters, Carole and Beverly. The family farm eventually became a century farm. Mildred enjoyed tending to her chickens, gathering eggs, keeping her large garden, making meals during harvest time and most of all entertaining and baking for her family and friends. In 1985, Mildred and Raymond moved to Hampton, where they lived until Raymond's death in 1991. They enjoyed fifty three years of married life together. In 2001, Mildred sold her house and moved to a duplex in Hampton. Mildred was a member of the Marion Center Church where she was baptized, confirmed and married. Church and family were very important to her and it showed in the way she lived her life. Mildred was a very generous and caring person. She shared lots of love and joy with her family when she spent time with them. She enjoyed baking her famous "angel food cakes" from scratch. Mildred was also noted for baking chocolate chip cookies and fried chicken. She always had coffee, cookies and cinnamon rolls on the table when anyone would stop by. Mildred loved playing cards with her family and friends and belonged to several 500 card groups. She also enjoyed watching game shows on televison and reading the Bible and newspapers. Mildred was very active in her church and she was a lifelong member of the Women's Fellowship. She was also an active Farm Bureau Member and a member of the Franklin General Hospital Auxiliary, where she helped with the Lobby Gift Shop and delivering mail to the patients. Mildred was happiest when she could help, bake or give of herself to family and friends. She was a people person and enjoyed having family gatherings for birthdays, special holidays or for no reason at all. Left to cherish her memory are her two daughters, Carole (Marvin) Kracht of Hampton and Beverly (Richard) Saylor of Dubuque, three grandchildren, Jeffery (Rochelle) Kracht of Clear Lake, Darcie (Justin) Carney of St. Louis, Missouri and Darrick (Tricia) Saylor of Peoria, Illinois, five great grandchildren, Heather Kracht of North Liberty, Logan Kracht of Clear Lake, Molly Carney of St. Louis, Missouri, Bradley Saylor of Peoria, Illinois and Jackson Saylor of Peoria, Illinois, one great great granddaughter, Ashlyn of North Liberty, sister-in-law, Milly Schaefer of Latimer and many nieces, nephews, relatives and friends. Mildred was preceded in death by her parents, August and Anna Schaefer, her husband, Raymond on July 17, 1991, two brothers, Harold and Gus Schaefer, sister Marjorie Stoffer, sister-in-law, Ruth Schaefer and two sisters who died in infancy.

Mildred Pauline Marie Dohrmann, 92, of Hampton, Iowa, formerly of Latimer, Iowa, passed away Friday, April 9, 2010, at St. Luke's Hospital in Cedar Rapids, Iowa. She was born to August and Anna (Meyer) Schaefer on May 7, 1917, on a farm near... View Obituary & Service Information

The family of Mildred Dohrmann created this Life Tributes page to make it easy to share your memories.