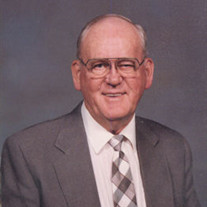 Rev. Milton A. Eklund, 91, of Hampton, Iowa, passed away July 7, 2010, at the Franklin General Hospital Nursing Facility in Hampton, Iowa. He was born on December 5, 1918, in Warren, Pennsylvania, to Rev. Axel and Frida (Blomquist) Eklund. Milton graduated from High School in DeKalb, Illinois. He received a Bachelors degree from Gustavus Adolphus College and later graduated from Central Theological Seminary. Milton was married to Nanette Timmer and later to Shirlee Holm. He served his country in the United States Air Force during WWII. Milton was a Lutheran minister for over 55 years. He was a pastor of St. John's Lutheran Church in rural Hampton and was also a member of the St. Paul Lutheran Church in Hampton. Milton served on the board for Hospice of North Iowa and was an active member of the community including the Lions Club and the American Legion. He enjoyed golfing, fishing, writing poetry, listening to classical music and most of all spending time with his family and friends. Milton is survived by his daughter Timmerly Eklund of Washburn, Illinois, son Andrew Eklund of Toledo, Ohio, daughter Sally (Steve) Sawin of Glenn Heights, Texas, daughter Frida (John) Maiers of Bloomington, Minnesota, sister Bernice (Bill) Sucha of Green Bay, Wisconsin, step-son Norm (Eileen) Holm of Hampton, grandchildren Andrea, Brett, Seth, Joshua, Emily, Samuel, Seth, Stephan, Sarah, Salome, Caitlin, Carl and John, along with seven great grandchildren. He was preceded in death by his parents, wife Shirlee, brothers Roland and Paul, sister Margaret and daughter Catherine Burchell. In lieu of flowers, memorials may be directed to Hampton Senior Center or Hospice of North Iowa.

Rev. Milton A. Eklund, 91, of Hampton, Iowa, passed away July 7, 2010, at the Franklin General Hospital Nursing Facility in Hampton, Iowa. He was born on December 5, 1918, in Warren, Pennsylvania, to Rev. Axel and Frida (Blomquist) Eklund.... View Obituary & Service Information

The family of Rev. Milton A. Eklund created this Life Tributes page to make it easy to share your memories.

Send flowers to the Eklund family.