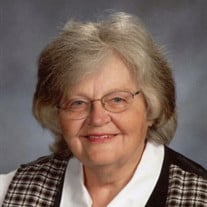 Myrna Jean Behn, 74, of Hampton, Iowa, passed away on March 19, 2012 at her home in rural Hampton. She was born on February 17, 1938, in Hampton, to Erwin and Louise (Pralle) Behn. She graduated from Franklin Consolidated School in Latimer, Iowa in 1956. Myrna was a kind, loving and patient person. She enjoyed gardening and flowers. Her willingness and ability to care for others began when she became a Nurse's Aid at the Lutheran Hospital in Hampton. She became a care giver for many families in the surrounding area. Later, she became a punch card operator for Co-Mo Photo and GAF Photo in Mason City, Iowa. She enjoyed her last years of employment, working in food service for Waldorf College in Forest City, Iowa. Myrna was a lifelong member of Trinity Lutheran Church. Her family, neighbors and friends were an important part of her life. Myrna is surived by two sisters, Mrs. (Floyd) Arliss Greimann of Sheffield and Rozann Herwig of Hampton, three nephews, Gordon Greimann (Lori Toomsen), Larry Greimann and his children, Taylor and Zachary of Sheffield, Matthew and Sandra Weir and their children, Krissy Weir, Tyler Amundson, Krista Amundson and Gage Amundson of Charles City, Iowa, a niece, Meghan Weir and fiancÃ© Jason Lloyd of Mason City, Iowa. Myrna valued her friendship with Velma Severson and Leona Orvick of Forest City, Iowa and special friend Fred Pogge of Forest City. She was preceded in death by her parents, a sister, Carla Weir, two brothers in law, Deane Weir and Kenneth Herwig, and a nephew Michael Weir. Burial will be in the Trinity Lutheran Church Cemetery

Myrna Jean Behn, 74, of Hampton, Iowa, passed away on March 19, 2012 at her home in rural Hampton. She was born on February 17, 1938, in Hampton, to Erwin and Louise (Pralle) Behn. She graduated from Franklin Consolidated School in Latimer,... View Obituary & Service Information

The family of Myrna Jean Behn created this Life Tributes page to make it easy to share your memories.

Send flowers to the Behn family.