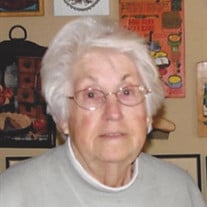 Norma Lee Abbas Palmer, 80, of Hampton, Iowa, died December 7, 2013 at Franklin Country View Nursing Facility. Ms. Palmer was born January 15, 1933 to George and Ida Lauterbach Abbas in rural Franklin County. She attended rural school and graduated from Geneva High School in 1951. Following high school, she attended the Iowa State Teachers College graduating in 1955 with a teaching endorsement in home economics. After completing her degree, she taught for several years in Aplington. During her tenure in Aplington, she taught art in addition to home economics. Then, because of her mother's deteriorating health, and the resulting desire to be closer to home, she began teaching at Sheffield. She would teach home economics at Sheffield for many years. The high school girls adored her and many saw her as a second mother. With changing circumstances, her teaching assignment became a half-time position. Always one to fully occupy her time, she began making wedding gowns for both family and friends. An accomplished seamstress, Norma provided numerous young women with the gown of their dreams. In addition to sewing gowns for brides, she would on occasion create the gowns for the attendants, the flower girls, and for the bride's mother. After retiring she started Norma's Cakes. She baked cakes for weddings, graduation and other events. Friends would ask to have her frosting recipe but that was top secret. Norma enjoyed baking and sharing her home baked goods with friends and neighbors. Norma enjoyed flowers. She had numerous flower beds and was always willing to share her flowers when she had extra. In 1969, she married Roger Palmer of Hampton. Norma and Roger would continue to live in the home she built in Hampton in 1962. Norma was a member of C.W.F, Kiwanis, and was on the Franklin General Hospital Board. She loved to volunteer and to help others. Following Roger's death she sold her home and moved to the Senior Center Apartments in Hampton. There she attended the Senior Center and volunteered her time. Preceding her in death were her parents, George and Ida; her husband, Roger; her brother, Bud; an infant sister, Helen Marie; a nephew, Bradley Abbas; and a niece, Donna Horner. She is survived by a special niece, Jody (Mark Malcolm), great-niece, Josie Abbas, sisters, Arlene (Donald Horner) of Hampton, Gertrude (Lee Himan) of Ames, Lena Salven of Marion; two brothers, George (Donna) Abbas and Bob (Ilene) Abbas, both of Hampton; and a sister-in-law, Dorothy Abbas, also of Hampton and many nieces, nephews, and friends. St. Peter's United Church of Christ Church Cemetery in rural Geneva, Iowa.

The family of Norma Lee Palmer created this Life Tributes page to make it easy to share your memories.

Send flowers to the Palmer family.