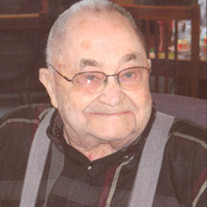 Norman Jacob Hansen, 92, of Hampton, Iowa, passed away June 7, 2010, at the Franklin General Hospital Nursing Facility in Hampton, Iowa. He was born on September 11, 1917, son of Jacob and Elna (Petersen) Hansen, in rural Latimer, Iowa. Norman attended the Lutheran Christian Day School in Latimer. He was united in marriage to LaVonne Boyenga on June 27, 1941, in Bethany, Missouri. After marriage they moved to the home farmstead southwest of Hampton, where they resided until retiring to Hampton in 1978. They moved to Franklin Prairie Assisted Living in 2004. Norman loved farming, loved his family, all their hugs and kisses, and was proud of all his grandchildren and great grandchildren. His children thought he was the best dad ever. In his retirement years, he loved mowing the lawn, keeping his yard in top shape, putting puzzles together, and most of all, spending time with LaVonne. June 27th would have been their 69th anniversary. Norman has been a member of the Trinity Lutheran Church since 1955. Left to cherish his memory are his wife, LaVonne; children; Eileen Murray, Marshalltown, Pat (Don) Voy, Elma, Norma Jean (Virgil) Caruth, Hollister, MO, and Larry (Renee) Hansen, Hampton, eleven grandchildren and eighteen great grandchildren. Norman was preceded in death by his parents, brother Ary, and son-in-law Barry Murray.

The family of Norman Jacob Hansen created this Life Tributes page to make it easy to share your memories.

Send flowers to the Hansen family.