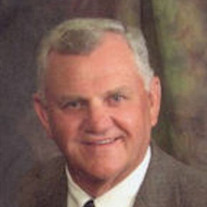 Norval Vance Korth was born on November 13, 1948, to Theodore and Ethel Korth. He passed from this world on December 16, 2011, having loved and having been loved in return. He lived his life in the Dows area and attended CAL High School, graduating in 1966. It was at that high school that he met his sweetheart, Denise June Myers. They married in 1967 and started a life together that would eventually include three children and six grandchildren. In 1968, Norval graduated from Ellsworth with a degree in petroleum marketing which suited him throughout his working life. He first worked for the family trucking business for years and then continued afterward working for Smithway trucking. Following his time in the trucking industry, he began his own contracting business, Norval Korth Construction, and was affiliated with Midwest Meter in Hampton. He continued in that business to the day of his passing. He led a life filled with interests in people and things. Norval was active in Pheasants Forever, serving as president of his local chapter. He was particularly interested in building habitats for wildlife and was actively involved in the annual banquet to raise funds to accomplish that. Norval loved all things Corvette. He was a member of the North Iowa Corvette Club and participated in the activities of this group, which included drives and social occasions. The motto of the club is "Have fun and enjoy the Vettes," which he did. He was actively involved in other social groups. He and Denise regularly participated in Dows and Hampton card clubs. He also was a member of the Morgan Methodist Church until recently, when he transferred to the Hampton Methodist Church to coincide with a move to Hampton. Norval was a family man who loved to spend time with his family, which includes his wife, Denise, of 44 years, son Torie (Stephanie) Korth of Hampton, daughter Janette (Steve) Birdwell of Altoona, and son Tracy (Patti) Korth of Alexander, He also loved spending time with his six grandchildren. He spent many happy hours with Madison Korth, Kennedy Korth, Chase Skarpness, Abby Birdwell, Jackson Birdwell and Jensen Birdwell, giving rides on the 4wheeler (known as "the mule,") attending school activities and playing billiards. Norval was preceded in death by his parents and sister. Burial Will take place at the Alexander Cemetery in Alexander, Iowa.

Norval Vance Korth was born on November 13, 1948, to Theodore and Ethel Korth. He passed from this world on December 16, 2011, having loved and having been loved in return. He lived his life in the Dows area and attended CAL High School, graduating... View Obituary & Service Information

The family of Norval Korth created this Life Tributes page to make it easy to share your memories.

Send flowers to the Korth family.