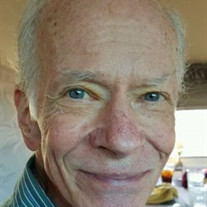 Orlin Brice Numelin, 71, of Hampton, Iowa, passed away Monday, April 3, 2017, at his home in Hampton, Iowa. He was born July 25, 1945, in Hampton, Iowa, to Walter Bernard and Emma Marie (Larsen) Numelin. Orlin graduated from Hampton High School in 1963. He was united in marriage to Cathy Mittelstadt on October 18, 1969. To this union, two sons were born. Orlin served his country in the U.S. Army during the Vietnam War. He worked in electronics repair and sales and as a technician, as well. He enjoyed gardening, lawn work, trains, electronics and technology, camping with his family, spending time with his grandchildren and fishing. Orlin is survived by his wife Cathy Ann Numelin of Hampton, sons Christopher (Aimee) Numelin of Hampton and Andrew (Carrie) Numelin of Merriam, Kansas, grandchildren Skylar Numelin of Hampton, Sofie Numelin and Fionna Numelin of Merriam, Kansas, mother-in-law Norma Mittelstadt of Hampton, sisters-in-law Nancy Robertson of Geneva, and Lori (Dan) Hubka of Sheffield. He was preceded in death by his paternal grandparents Jens and Martha Numelin, maternal grandparents Chris and Gina Larsen, his parents and brother Merlin.

The family of Orlin Numelin created this Life Tributes page to make it easy to share your memories.

Send flowers to the Numelin family.