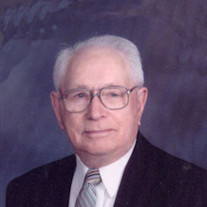 Orval Kendall Marts, 93, of Hampton, Iowa, passed away February 3, 2011, at the Franklin General Hospital Nursing Facility in Hampton, Iowa. He was born December 6, 1917, to Brenton and Fannie (Saylor) Marts, on the family farm in rural Hampton, Iowa. Orval graduated from Hampton High School. He was united in marriage to Asta Lauritzen on May 17, 1941, in Hampton. Orval farmed for most of his life. He was a lifetime member of the United Methodist Church in Hampton. Orval was a 4-H leader for twenty-one years, where he received the five, ten, fifteen and twenty year pins along with the alumnus award, which is the highest on the county level. He was on the Franklin County extension council board for four years and was chairman for two of those years. Orval was a trustee of Reeve Township for ten years, the director of the Iowa State Holstein Association for four years, youth chairman of the State Holstein Association for seven years and was a Hampton Lions member for ten years. Orval enjoyed dancing and playing bridge with his wife Asta, fishing, gardening, woodworking, where he crafted many items, some of which he donated to the United Methodist Church and most of all spending time with his family and friends. Orval is survived by his daughter Dianna and husband Loren Engelbrecht of Fredericksburg, grandson Michael and wife Christina Engelbrecht of Hermiston, Oregon, grandson Matthew and wife Katrina Engelbrecht of Waverly, great grandchildren Noah, Rebecca, Leah, Mara, Rachel and Kelsey along with six nieces and nephews. He was preceded in death by his parents, wife and seven brothers and sisters. Burial will take place in the Hampton Cemetery. Memorials may be directed to the Hampton United Methodist Church or the Franklin General Hospital Nursing Facility in Hampton.

Orval Kendall Marts, 93, of Hampton, Iowa, passed away February 3, 2011, at the Franklin General Hospital Nursing Facility in Hampton, Iowa. He was born December 6, 1917, to Brenton and Fannie (Saylor) Marts, on the family farm in rural Hampton,... View Obituary & Service Information

The family of Orval Kendall Marts created this Life Tributes page to make it easy to share your memories.